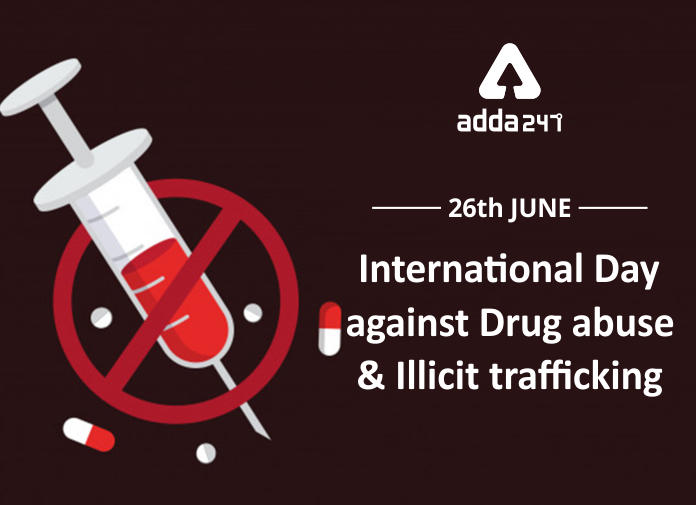 International Day Against Drug Abuse & Illicit Trafficking: Drug abuse is a very serious problem now around the world, especially among teenagers. Keeping this in mind, the United Nations observe 26th June as the International Day against Drug abuse & Illicit trafficking. The day is observed not just by the UN but across the world and different campaigns are organized by different NGOs and other organizers. The theme this year for the International Day Against Drug Abuse and Illicit Trafficking is ‘Share Drug Facts to Save Lives’.The focus of this year is to curb the spread of misinformation about drugs and to encourage the exchange of facts regarding drugs.

The Background behind the Day

In a report launched by the UN Office of Drugs and Crime (UNODC), there are as many as 200 million across the globe who are addicted to illicit drugs such as cocaine, opiates, cannabis, and many others. Hence, it was in the year 1987 when the UN held an International conference on the matter and then declared that an International Day against Drug abuse & illicit trafficking will be observed and the date was finalized to be 26th June.

The UN is quite serious about the matter and hence is ready to take all possible measures to curb the problem. After the resolution was declared the decade of 1991 to 2000 was considered as the United Nations Decade against Drug Abuse. Along during this decade, the UN made a political declaration to spread awareness of the problem globally. This declaration was to fight against the problem on a global ground.

Drug abuse is a massive issue that has destroyed many lives as of now. Mostly, teenagers get entrapped in this problem in the likelihood of trying something new. They might think of trying the drug just for once but soon they might land up using it several times just for fun. Soon, a time comes up when they get addicted to it. Not just teenagers, a number of elderly people also get addicted to drugs for several reasons such as to tackle the hardships of life.

When a person is addicted to drugs, it not only hampers the person’s physical health but also the whole life. Most of such people have been noticed to lose interest in a well-established career and indulging most of the time with intoxication. This slowly damages the career of the person.

Also, a lot of people spend a huge amount of money on buying expensive drugs and gets bankrupt in this way. There have been also instances that these people start stealing and other illegal activities in order to get money to buy drugs.

Of course, such instances not just lead them to death at the maximum also may lead to other painful situations such as distancing of the family members, and loss of reputation in the society.

How the day is observed?

The UN runs a number of campaigns to spread awareness about how drug use can lead a person to a total disaster. Also, there are different campaigns that also educate the people about how to take care of a drug-addicted person and what are the measures to follow so that the addicted person can be from back to normal life.

Today, there are a number of drug addiction rehabilitation centers that help in treating drug-abused people. Awareness about these centers is also spread out so that more addicted people can be provided the best treatment.

It has been also noticed that often the society sees such addicted people with a vision of disgust. This again leads the addicted to stay with the addiction and lose interest in life. Hence, it is also the responsibility of society to understand that a person suffering from drug abuse is something that needs help and not disgust. They might have started the intake out of their will but you are not aware of the backward behind that willingness. It can be pressure from friends at an early age; also it can be a result of heartbreak or a bad situation in life. Hence, it is the responsibility of the friends and family to diagnose if the person is moving towards addiction and should take proper steps against it.

Today worldwide, a large number of rallies and promotional events are carried out not just on this specific day but also on other days to make people aware of the ill impacts of drug abuse and to keep everyone more enlightened about how to deal with the situation.

Answer: The International Day against abuse & illicit trafficking is observed on 26th June.

Q2. Since when the UN started observing the International Day against Drug abuse & illicit trafficking?

Answer: The UN started the observation of the International Day against Drug abuse & illicit trafficking in 1987.

Q3. What is the motto of observing the International Day against Drug abuse & illicit trafficking?

Answer: The motto of observing the International Day against Drug abuse & illicit trafficking is to spread awareness against the ill impacts of drug abuse and educate people of how to treat people addicted to drug abuse.