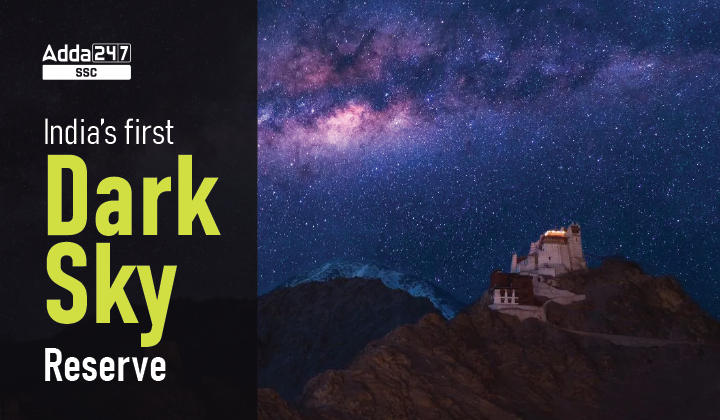 Recently, the Department of Science & Technology (DST) has announced the setting up of India’s first Dark Sky Reserve in Hanle, Ladakh.

A Dark Sky Reserve is public or private land with a distinguished nocturnal environment and starry nights that has been developed responsibly to prevent light pollution.
It is a designation given to a place that has policies in place to ensure that a tract of land or region has minimal artificial light interference.
According to the International Dark Sky Association (IDSA) website, these reserves consist of:
a core area meeting minimum criteria for sky quality and natural darkness, and a peripheral area that supports dark sky preservation in the core.
Process of site becoming a Dark Sky Reserve.

What are the Key Highlights of the Dark Reserve in Ladakh?

MoU for Setting up Dark Reserve: There was a three-way Memorandum of Understanding was signed among the Union Territory administration, Ladakh Autonomous Hill Development Council (LAHDC), Leh, and the Indian Institute of Astrophysics (IIA), Bengaluru, which uses and maintains the telescopes, for launching the Dark Space Reserve.
It will have activities to help in boosting local tourism(Astro-tourism) and the economy through interventions of science and technology.
Villagers and residents will also be trained to help visitors with astronomical observations.
There will be delineators on roads like you do outside observatories. People can come, park, observe the sky and stay in homestays.
Wildlife Awareness: A visitor centre would also be set up to inform people not only about astronomy but also about the wildlife and plant life in the adjoining Changthang Wildlife Sanctuary.

Why was Ladakh chosen for Setting up the Dark Reserve?

Cold Desert with Sparse Population: The Indian Astronomical Observatory, the high-altitude station of IIA, is situated to the north of the Western Himalayas, at an altitude of 4,500 metres above mean sea level.
Located atop Mt. Saraswati in the Nilamkhul Plain in the Hanle Valley of Changthang, it is a dry, cold desert with a sparse human population and has the Hanle monastery as its nearest neighbour.

Clear Skies: The cloudless skies and low atmospheric water vapour make it one of the best sites in the world for optical, infrared, sub-millimetre, and millimetre wavelengths.

Process of site certification to the International Dark Sky Association

India is still in the process of filing its nomination to IDSA.

Q. India’s first Dark Sky Reserve is going to be located in?

Ans. India’s first Dark Sky Reserve is to be located in Ladakh.

Q. Can only public owned land be considered by IDSA as suitable for dark sky Reserve?

Ans. No, both public and private owned land can be suitable for Dark Sky Reserve.

India's first Dark Sky Reserve is going to be located in?

India's first Dark Sky Reserve is to be located in Ladakh.

Can only public owned land be considered by IDSA as suitable for dark sky Reserve?

No, both public and private owned land can be suitable for Dark Sky Reserve.