The Indus originates in the northern slopes of the Kailash range in Tibet near Lake Manasarovar. It follows a north-westerly course through Tibet. It enters Indian territory in Jammu and Kashmir.
It forms a picturesque gorge in this part. Several tributaries – the Zaskar, the Shyok, the Nubra and the Hunza join it in the Kashmir region. It flows through the regions of Ladakh, Baltistan and Gilgit and runs between the Ladakh Range and the Zaskar Range. It crosses the Himalayas through a 5181 m deep gorge near Attock, lying north of the Nanga Parbat and later takes a bend to the south west direction before entering Pakistan. It has a large number of tributaries in both India and Pakistan and has a total length of about 2897 km from the source to the point near Karachi where it falls into the Arabian Sea. The main tributaries of the Indus in India are Jhelum, Chenab, Ravi, Beas and Sutlej.
Jhelum:
The Jhelum originates in the south-eastern part of Kashmir, in a spring at Verinag. It flows into the Wular Lake, which lies to the north, and then into Baramula. Between Baramula and Muzaffarabad it enters a deep gorge cut by the river in the Pir Panjal range. It has a right bank tributary the Kishanganga which joins it at Muzaffarabad. It follows the Indo-Pakistan border flowing into the plains of Punjab, finally joining the Chenab at Trimmu.
Chenab:
The Chenab originates from the confluence of two rivers, the Chandra and the Bhaga,which themselves  originate from either side of the Bara Lacha Pass in Lahul. It is also known as the Chandrabhaga in Himachal Pradesh. It runs parallel to the Pir Panjal Range in the north-westerly direction, and cuts through the range near Kishtwar. It enters the plains of Punjab near Akhnur and is later joined by the Jhelum. It is further joined by the Ravi and the Sutlej in Pakistan.
Ravi:
The Ravi originates near the Rotang pass in the Kangra Himalayas and follows a north-westerly course. It turns to the south-west, near Dalhousie, and then cuts a gorge in the Dhaola Dhar range entering the Punjab plain near Madhopur. It flows as a part of the Indo-Pakistan border for some distance before entering Pakistan and joining the Chenab river. The total length of the river is about 720 km.
Beas:
The Beas originates in Beas Kund, lying near the Rohtang pass. It runs past Manali and Kulu, where its beautiful valley is known as the Kulu valley. It first follows a north-west path from the town of Mandi and later a westerly path, before entering the Punjab plains near Mirthal. It joins the Sutlej river near Harika, after being joined by a few tributaries. The total length of the river is 615 km.
Sutlej:
The Sutlej originates from the Rakas Lake, which is connected to the Manasarovar lake by a stream, in Tibet. Its flows in a north-westerly direction and enters Himachal Pradesh at the Shipki Pass, where it is joined by the Spiti river. It cuts deep gorges in the ranges of the Himalayas, and finally enters the Punjab plain after cutting a gorge in a hill range, the Naina Devi Dhar, where the Bhakra Dam having a large reservoir of water, called the Gobind Sagar, has been constructed. It turns west below Rupar and is later joined by the Beas. It enters Pakistan near Sulemanki, and is later joined by the Chenab. It has a total length of almost 1500 km. 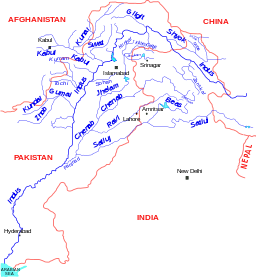