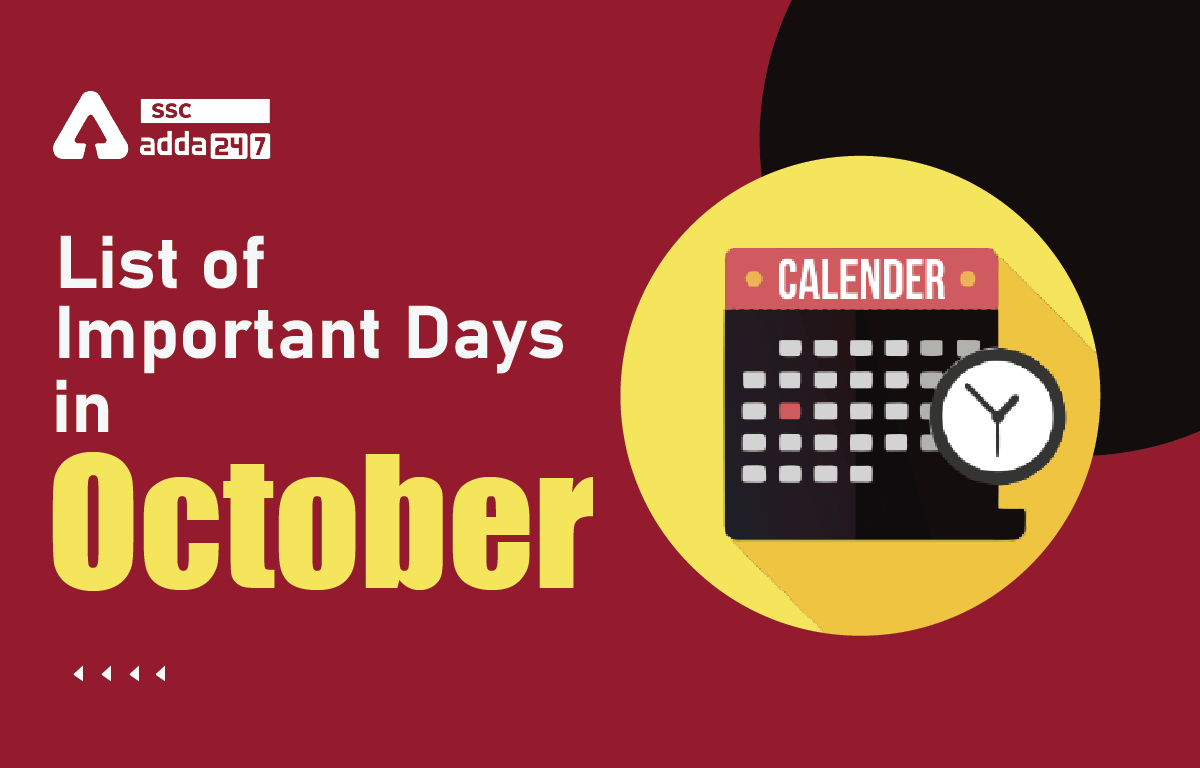 Important Days in October: India is a land of diversity, there are various festivals, occasions, and formal holidays that are celebrated every month. There is diversity in every corner of the country, diversity in language, regional rituals observed in every state. Various events and festivals are celebrated in India with full enthusiasm and some events are of international importance too. Are you looking for the list of important days celebrated in the month of October? In  October 2022, there are various international and national events that are recognized and celebrated. Navratri and Dussehra are auspicious festivals that are also in 2022. We are providing you with the complete list of important days in October along with the significance of each day to help you understand it in a better way. Check out the list of important days in October 2022.

The table given below shows a list of Important Days and Events in October 2022. The candidates preparing for the Government exams must go through these dates for the preparation.

Important Days in October 2022 In Hindi

The International Day of Non- Violence is celebrated every year globally on 2 October. International Day of Non-violence is celebrated to commemorate the birth anniversary of Mahatma Gandhi, father of India and the leader of the Indian Independence movement. He strongly believed in non-violence when freedom fighters were struggling to free India from slavery by Britishers.

Gandhi Jayanti is celebrated on 2nd October every year to mark the birth anniversary of Mahatma Gandhi. He was born on 2nd October 1869 in Porbandar, Gujarat. He is an inspiration in the lives of famous world leaders and our lives also.

Shastri was born to Sharada Prasad Srivastava and Ramdulari Devi in Mughalsarai on 2 October 1904, sharing his birthday with Mahatma Gandhi, who was born on 2nd October, 1869. He was posthumously awarded the Bharat Ratna.

World Nature Day is celebrated globally every year on 3 October. The purpose of the celebration is to raise awareness towards preserving the balance of nature. We must be grateful to nature for providing us with natural resources and pledge to protect the ecosystem.

World Habitat Day is celebrated every year on the first Monday of October. This year, it falls on 4 October. The theme of World Habitat Day is “Accelerating urban action for a carbon-free world”. World habitat day was declared by the UN resolution in 1985 and first celebrated in 1986. The objective is to minimize the presence of carbon footprints present in our environment.

World Animal Welfare Day is observed globally on 4 October every year. The theme of World Animal Day is “Forests and Livelihoods: Sustaining People and Planet”. Every year, several species go extinct due to excessive hunting, and forests are cut off to build concrete jungles. The day is celebrated to raise awareness about the protection and prevention of cruelty towards animals.

World Teacher’s day celebrated internationally on 5 October every year. UNESCO proclaimed 5 October as World Teacher’s day in 1994. This day is celebrated to appreciate the work and efforts of teachers globally. Teachers shape the minds of the younger generation for a better future to work for the goodwill of nation and the world as well.

The International girl child day is celebrated globally on 11 October. The day is celebrated to raise voices about the rights of girls and empower them through education. The objective is to protect them from illegal abortion practices, physical abuse at home and fight the battle against human trafficking.

World Arthritis Day is observed every year on 12 October. The day aims to raise awareness about the existence and impact of rheumatic and musculoskeletal diseases faced by older people across the world.

UN International Day for National Disaster Reduction is observed every year on 13 October. This day is declared by United Nations General Assembly to spread awareness about disaster risk reduction caused by natural calamities and human beings as well.

World Standards Day is celebrated each year on 14 October globally. The day aims to pay tribute to the collaborative efforts of thousands of experts worldwide who develop the voluntary technical agreements that are published as International Standards for various products and services.

World White Cane Day is celebrated every year on 15 October by the National Federation of the Blind. The day aims to shift focus from safety as well as the independence of blind people and to continue to use the white cane as a guide.

World Food Day is celebrated every year on 16 October. The theme of World Food Day is “Our actions are our future- Better production, better nutrition, a better environment, and a better life”. The day aims to raise awareness about a healthy and wholesome diet for every human being.

17th October – International Day for the eradication of poverty

International Day for the Eradication of Poverty is observed every year on 17 October. The day is celebrated to raise the willingness of poor people to use their expertise and contribute to the eradication of poverty. This can be done by providing health services, employment opportunities, and training them to become financially independent.

World Thrift Day is celebrated every year on 30 October in India and 31st October across the world. The day aims to promote awareness about savings and the financial security of a nation and individuals.

National Unity Day is celebrated every year on 31 October, since 2014 in India. This day is observed in the memory of Sardar Vallabh Bhai Patel, also known as the Iron man of India. He had played an important role in unifying the country. Sardar Vallabh Bhai Patel played important role in the unifying of India and made it EK BHARAT (Unity in Diversity).

Q. What are the important days in October?

The important days in October include International Day of Non-Violence on 2nd October, United Nations Day on 24th October, National Unity Day on 31st October, and many more.

Q. What is special about October?

October is special as it witnesses a variety of days celebrated across the globe to commemorate a special event.

Q. Why is it necessary to know about the important days of October?

The important days of a month are asked in various competitive exams and hence, it is mandatory to memorize them.