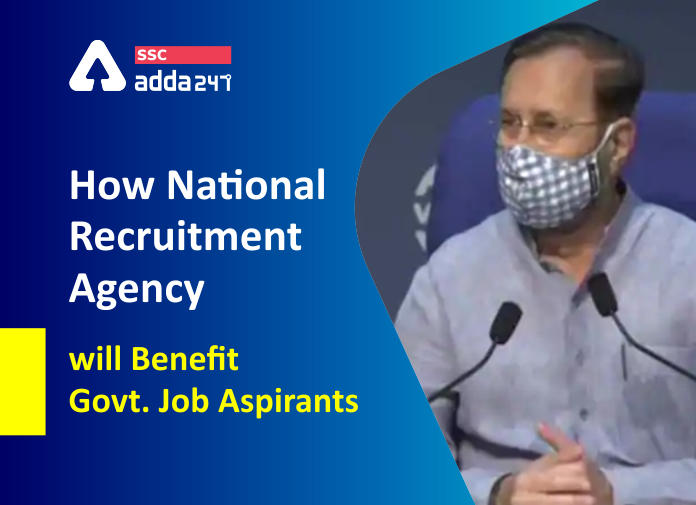 The National Recruitment Agency will conduct separate CET graduate, higher secondary and the matriculate candidates for non-technical posts to which recruitment is presently carried out by the Staff Selection Commission (SSC), the Railway Recruitment Boards (RRBs) and by the Institute of Banking Personnel Selection (IBPS). Here is how NRA will benefit govt Job Aspirants

Government has approved a sum of Rs 1517.57 crore for the NRA. The expenditure will be undertaken over a period of three years. The majority of the money will be used for setting up exam infrastructure in 117 districts with large numbers of aspirants. The proposal is expected to ease the access to aspirants residing in rural areas.

Benefit for Candidates from Rural Areas

The candidates who comes from weak rural background have to make a difficult choice as to which examination they want to appear in as many government exams form cost more than Rs. 500/-. Under the NRA, the candidates by appearing in one examination will get an opportunity to compete for many posts.

CET score will be valid for 3 years and the best score during the 3 years will be taken into consideration. There shall be no restriction on the number of attempts to be taken by a candidate to appear in the CET subject to the upper age limit. This would go a long way in mitigating the hardship of candidates who spend a considerable amount of time, money and effort preparing and giving these examinations every year.

Depending upon the screening done at the CET score level, final selection for recruitment shall be made through separate specialised Tiers (II, III etc) of examination which shall be conducted by the respective recruitment agencies. The curriculum for this test would be common as would be the standard. This would greatly ease the burden of candidates who are at present required to prepare for each of the examinations separately as per the different curriculum.

The Common Eligibility test will be conducted twice a year. It can be taken in 12 different languages to begin with. The exam centres will be established in 117 districts.

Shortening of the recruitment cycle

A single eligibility test would significantly reduce the recruitment cycle. Some Departments have indicated their intention to do away with any second-level test and go ahead with the recruitment on the basis of CET scores, Physical Tests, and Medical examination. This would greatly reduce the cycle and benefit a large section of youth..