Q2. According to Census 2011 which of the following was the largest district in terms of population?
(a) Karnal
(b) Panchkula
(c) Ambala
(d) None of these

Q3. Which of the following river of Haryana does not originates from Shivalika Range of mountains?
(a) Markanda
(b) Dangri
(c) Ghaggar
(d) Badkhal

Q4. Which of the following cities has the maximum production of Mushroom??
(a) Bhiwani
(b) Sonipat
(c) Sirsa
(d) Ambala

Q5. Which of the following cities of Haryana has a Amonia Plant?
(a) Panipat
(b) Karnal
(c) Ambala
(d) None Of These

Q6.Which of the following cities of Haryana is the largest producer of Mustard?
(a) Mahendragarh
(b) Panipat
(c) Karnal
(d) Rohtak

Q9. A Cultural clothing piece, Khandwa, is worn by people of Haryana on which body part?
(a) Head
(b) Neck
(c) Ear
(d) None Of these

Q10. Which place of Haryana is also known as “ Ashram of Kapilmuni”?
(a) Karnal
(b) Shafidon
(c) Kalayat
(d) None of these 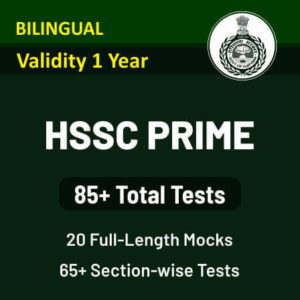