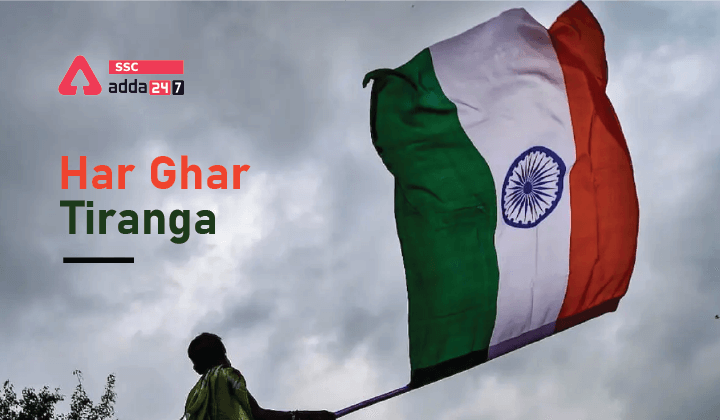 ‘Har Ghar Tiranga’ is a campaign under the sponsorship of ‘Azadi Ka Amrit Mahotsav’ to encourage people to bring the Tiranga to their homes and hoist it to go to mark the 75th year of India’s independence. Our relationship with the flag has always been more formal and institutional than personal. Bringing the flag home collectively as a nation in the 75th year of independence thus becomes symbolic of not only an act of personal connection to the Tiranga but also an embodiment of our commitment to nation-building. The idea behind the initiative is to invoke the feeling of patriotism in the hearts of the people and to promote awareness about the Indian National Flag, its importance, and its significance.

As part of the ‘Har Ghar Tiranga’ campaign to mark 75 years of India’s Independence, named Azadi ka Amrit Mahotsav the Government of India is aspiring to have at least 20 crore flags atop houses from 13th August to 15th August. Governments have been distributing flags and setting targets to manufacture the National Flag Tiranga on a mass level. It is a very appreciating initiative of the Government for all the citizens and it became a nationwide campaign. All the Indians showed their patriotic feelings through the Tiranga flag hosting at their homes from 13th August to 15th August.

As the 75th year of Independence, the government has decided to celebrate it effectively. Now Tiranga hosting became personal and nationwide through this campaign. The campaign was launched on July 22 by our Prime Minister– Narendra Modi. The initiative aims at encouraging people across the country to hoist the national flag to raise awareness and increase their patriotic feelings in them. The recent improvements made to the Flag code of India allow citizens to hoist the national flag during the day and night at their homes.

It is celebrated on a mass level across the country and appreciated by all the citizens. The State Governments also support to Central Government to make the campaign more successful. Through this, the citizens know the importance of the National Flag as well and the respect for our National flag will also increase this.

Hope you find what you were looking for, To get Details on ‘Azadi Ka Amrit Mahotsav’ stay connected with sscadda.com. And if you want to read this article in Hindi then click on the link provided below.