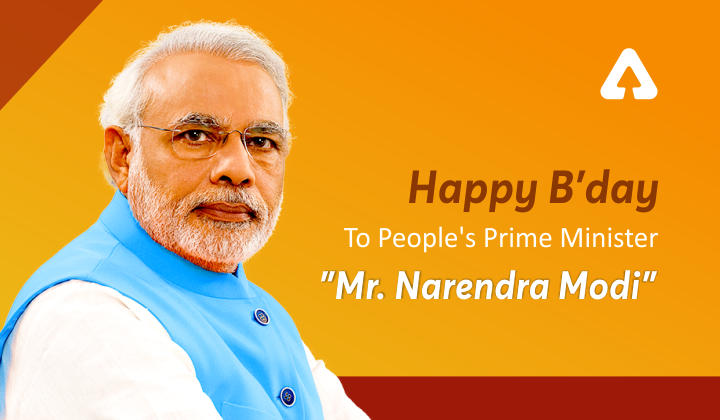 Happy Birthday Mr. Narendra Modi: A Role Model For Everyone

Narendra Damodardas Modi, (born September 17, 1950) was born and raised in Vadnagar, a small town in northern Gujarat. He joined  Rashtriya Swayamsevak Sangh (RSS) at a very young age. He established a unit of the RSS’s student’s wing, the Akhil Bharatiya Vidyarthi Parishad (ABVP) in his area and gradually started to rise in the RSS hierarchy.

In the year 1987, Modi joined BJP and was soon made the general secretary of the BJP’s Gujarat branch. He was one of the key members behind BJP’s success in the 1995 state legislative assembly elections.

In the year 2001 when the then Gujarat’s CM Keshubhai Patel’s health deteriorated Narendra Modi was elected as the replacement and was eventually elected the by-poll election in Feb 2002.

He was the Chief Minister during the infamous Godhra riots which killed more than 500 people and were heavily criticized by political leaders from all around the world. In 2005 USA even declined his diplomatic visa request and stated that he was responsible for the 2002 riots in some way. But all these controversies and events didn’t stop him from winning state assembly elections in 2007 and then again in 2012.

For the 2014 General Elections BJP named Narendra Modi as their  Prime Minister Candidate. The elections were completely centered around Narendra Modi and BJP launched the promotional campaigns with the slogan “Abki Baar Modi Sarkar”. BJPs landslide victory in the elections meant that BJP was back in power for the first time since the 13th Lok Sabha elections. BJP managed to win 282 seats paving way for Modi to become PM. In the 2019 Lok Sabha elections same story was repeated as this time BJP won 303 seats and Modi became the first Non-Congress PM to be elected after completing a full term.

He is the first prime minister born after India’s independence in 1947, the second non-Congress one to win two consecutive terms after Atal Bihari Vajpayee, and the first from outside the Congress to win both terms with a majority in the Lok Sabha. Modi became the 4th longest-serving Prime Minister of India and the longest-serving Non-Congress Prime Minister in 2020.

Prime Minister Narendra Modi has turned 71 this year. PM Modi will be celebrating this birthday by lighting up 71,000 diyas (earthen lamps) at Varanasi’s Bharat Mata Temple in Kashi. Along with the lighting of lamps, the Bhartiya Janata Party (BJP) is planning to distribute 14 crore ration bags with “Thank-you Modiji” printed on them. Also, 5 crore postcards with PM Modi’s photo will be mailed from post offices across the country. This time, BJP is planning to make Modi’s birthday a big one by including various activities like blood-donation campaigns, clean-up drives for rivers, distribution of ration cards, and lots more.

Some important events which happened under the Modi government:

India is a youthful country. A country with such a major percentage of youth has the capability to change not only its own but the fate of the entire world