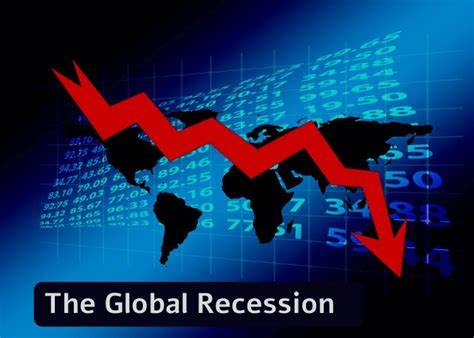 Global Recession 2022: The global economy is slowing as a stormy 2022 comes to a close. But economists don’t anticipate it to enter a recession, even if some of the major nations do. Business surveys issued indicated output decreases in the biggest economies in Europe in November, reinforcing estimates that these economies will likely fall in the last quarter of this year and the first quarter of next year due to rising energy prices.

● Some analysts believe that the U.S. economy may also experience two consecutive quarters of decline in the first half of next year as a result of the Federal Reserve’s monetary policy tightening.
● Economists are hesitant to predict a worldwide recession, which is typically defined as a rate of annual production growth that is below the rate of population increase—currently around 1%—despite the fact that a bad start to 2023 is anticipated in several of the world’s richest nations.
● The global economic downturn that many countries, companies, and consumers have been experiencing this year is likely to continue next year—with significant regional variations—but that the decline may not be as severe as initially anticipated and that it may reach a bottom during the course of the year.
● Many predictions are made that global output will increase by around 2% next year, a sharp deceleration from this year and well below its 3.3% average in the decade before the start of the Covid-19 pandemic, but still producing a small increase in output per person.
● China is anticipated to recover from an unusually weak 2022.
● The economy of Europe will be hit hardest in the coming months as a result of Moscow’s determination to reduce natural gas supply in an effort to weaken Western support for Kiev.
● One of the last remaining channels for Russian gas to reach Europe was threatened when the Russian natural gas giant Gazprom PJSC vowed to further restrict deliveries to Europe via Ukraine starting next week.

Global Recession 2022: What studies have to say about the global recession?

● Studies evaluating the economic impact of rising energy prices revealed another month of decreased activity in November, exposing the economic cost of increasing energy prices.
● S&P Global reported that its composite production index for the eurozone, which measures both manufacturing and service activity, increased from 47.3 in October to 47.8 in November but remained below the 50 threshold that separates an expansion from a contraction.
● The worst results that policymakers had feared as they prepared for a spike in energy consumption during the winter months appear unlikely to occur in Europe in the near future.
● Energy rationing in Europe’s factories is less likely thanks to a mild October and ample gas reserves.

● A modest increase in consumer confidence from record lows in September has been supported by European governments’ prompt action to assist consumers and companies confronting increased energy bills. Additionally, several producers have increased some previously decreased output as a result of natural gas prices falling from August highs.
● The winter of 2023 will certainly require the rebuilding of natural gas stockpiles due to lesser supplies from Russia than this year and increased competition from a faster-growing Chinese economy for liquefied natural gas.
● The cost of energy is expected to rise further over the course of the upcoming year, making it challenging for certain firms to break even.
● Even while the worst has not yet happened, the picture for Europe’s economies going into 2023 remains gloomy. This is especially true for Eastern European nations that border or are near to Russia.
● How far the Fed will have to hike rates in order to bring down inflation that has remained persistently high is the biggest unknown facing the American economy.
● As the government loosens some of the limitations related to the zero-Covid policy and the sluggish growth this year, the prognosis for the Chinese economy is likewise very uncertain.
The key to the anticipated recovery in growth next year, according to economists, is a gradual reduction in lockdowns that affect major industrial centres. However, a recent spike in infections has raised concerns about how quickly that can happen.
Economists caution that it is more possible that the economy may slow more abruptly than anticipated, just like in Europe.