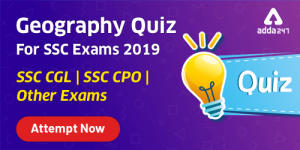 Q6. The atomic power station in Rajasthan is situated at:
(a) Pokhran
(b) Suratgarh
(c) Rawatbhata
(d) Chittorgarh

Q7. Which of the following caused radioactive pollution along the coast of Kerala?
(a) Plutonium
(b) Zinc
(c) Thorium
(d) Radium

Q8. Which of the following causes rainfall during winters in the northwestern part of India?
(a) Western disturbances
(b) Cyclonic depression
(c) Southwest monsoon
(d) Retreating monsoon

Q9. Which country is separated from India by a narrow channel of sea formed by the Palk Strait and the Gulf of Mannar?
(a) Bangladesh
(b) Myanmar
(c) Sri Lanka
(d) Pakistan

S1. Ans.(a)
Sol.The Great Barrier Reef is the world’s largest coral reef system. The reef is located in the Coral Sea, off the coast of Queensland, Australia in Pacific Ocean.

S3. Ans.(b)
Sol. The SAARC Secretariat is based in Kathmandu, Nepal. It coordinates and monitors implementation of activities, prepares for and services meetings, and serves as a channel of communication between the Association and its Member States as well as other regional organisations. SAARC was founded in Dhaka on 8 December 1985.

S5. Ans.(b)
Sol.Godavari is the longest river of peninsular India. It originates from Triambakeshwar, Nasik (Maharashtra) and covers a total of 1465 kilometers during its journey through states of Chhattisgarh, Telangana and Andhra Pradesh, before discharging into Bay of Bengal.

S9. Ans.(c)
Sol. Srilanka is separated from India by a narrow channel of sea formed by the Palk Strait and the Gulf of Mannar.

SSC Stenographer Grade C and D Notification 2020 To Be Out...