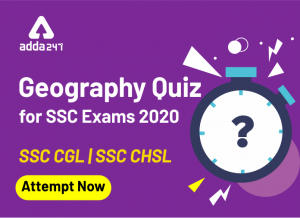 Q1. The impact of Green Revolution was felt most in the case of
(a) Wheat
(b) Rice
(c) Pulses
(d) Coal

Q2. What process takes place during the youthful stage of a river?
(a) Valley widening
(b) River rejuvenating
(c) Valley deepening
(d) Meandering

Q7. The world’s largest and deepest rail tunnel Gotthard Base Tunnel is located in which country?
(a) Belgium
(b) Austria
(c) Switzerland
(d) Sweden

Q8. One of the common forms of representing remote sensing data as information is in the form of
(a) Thematic Maps
(b) Political maps
(c) Distribution maps
(d) Land use maps

Q10. Which city is located on the banks of the river Chambal?
(a) Ahmedabad
(b) Ayodhya
(c) Badrinath
(d) Kota

S1. Ans.(a)
Sol. The Green Revolution in India was a period when agriculture in India increased its yields due to improved agronomic technology. This revolution allowed to overcome poor agricultural productivity. … The main development was higher-yielding varieties of wheat

S2. Ans.(c)
Sol. During the youthful stage river cuts vertically and leads to headward erosion because of its high velocity. This leads to valley deepening..

S5. Ans.(a)
Sol.The Ring of Fire is a 40,000 km horseshoe-shaped area of intense volcanic and seismic (earthquake) activity that follows the edges of the Pacific Ocean. The Ring of Fire includes 75% of the world’s active volcanoes. it is associated with a nearly continuous series of oceanic trenches, volcanic arcs, and volcanic belts and plate movements. It has 452 volcanoes.

S8. Ans.(a)
Sol.One of the common forms of representing remote sensing data as information is in the form of thematic maps.

S9. Ans.(b)
Sol. arble is a metamorphic rock that forms when limestone is subjected to the heat and pressure of metamorphism. It is composed primarily of the mineral calcite (CaCO3) and usually contains other minerals, such as clay minerals, micas, quartz, pyrite, iron oxides, and graphite.

S10. Ans.(d)
Sol. The Chambal River is a tributary of the Yamuna River in central India, Kota is located on the bank of Chambal River.