This time IB is following the UPSC exam pattern and forming the questions in a different manner. The questions are in the form of statement patterns and match the pair. This is becoming a little bit difficult for the candidates to understand the questions. In this article, we are going to discuss the complete analysis of  GA and GS for the IB ACIO exam conducted on 20th February 2021 in the first shift.

Q. Who won in the first IPL?

Q. Which book is not written by A.P.J. Abdul Kalam?

Q. Chandrayan 3 was launched by which space center?

Q. One Question from Centrifugation done in Lab.

Q. What is the emergency number for women all over India?

Q. One question from Jhoom Dance. 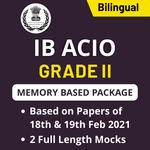