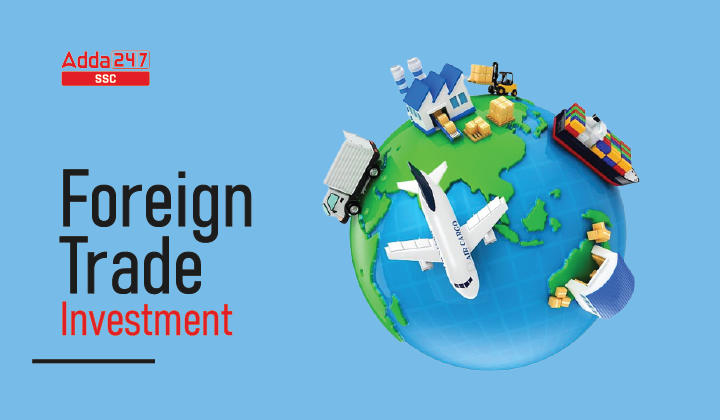 Foreign Trade Investment is an important part of economy covered in syllabus of various competitive examinations. We need to understand separately what is Foreign trade and what is Foreign Investment. Follow the article carefully to cover all the relevant aspects.

Foreign Trade is the exchange of goods and services between two or more countries in the international market. Every country, including the developed countries, are dependent on one another for natural or finished resources. This need is met by foreign trade which involves change in ownership of goods and services. This shift of ownership happens through transaction of money. In earlier times, barter system was primarily used for trade, where goods and services were exchanged in return for other products or services. The use of money has made trading faster and smoother.

There are two types of foreign trade:

Foreign Investment is the inflow of capital into a country through individuals or institutions from a different country. The investment helps corporations to widen their business in another country.

There are three types of investments an entity belonging to one country can make in another country. These are as follows:

India’s FDI inflows have increased 20 times from 2000-01 to 2021-22. According to the Department for Promotion of Industry and Internal Trade (DPIIT), India’s cumulative FDI inflow stood at US$ 847.40 billion between April 2000-March 2022; this was mainly due to the government’s efforts to improve the ease of doing business and relax FDI norms.

There are several barriers which hinders growth of Foreign Trade & Investment. These are summarised below.

Foreign Direct Investment or FDI is investment from an individual or firm or sovereign fund that is located in a foreign country into another country. FDI results into transfer of ownership to the entity making the investment.

FDI, on the one hand, help bring capital, technology, know-how etc. but on the other it comes with lots of disadvantages. We have discussed these advantages and disadvantages point wise below.

The advantages brought by Foreign Direct Investment includes the following:

Some of disadvantages associated with foreign direct investment are:

Q. How is FDI different from FPI?

Ans. FDI results in transfer of ownership which is not in the case of FPI.

Q. What are the types of Foreign investments?

Ans. It has been mentioned above in detail.