Q1. Distant objects are visible as a little out of focus in this condition:

Q3. Plank’s constant has the dimensions of:

Q4. Which of these travels in glass with minimum velocity?

Q5. Which of the following phenomenon helps to conclude that light is a transverse wave?

Q6. When Anuj saw Manish, he recalled, “He is the son of the father of my daughter’s mother.” Who is Manish to Anuj?

Q7. A girl introduced a boy as the son of the daughter of the father of her uncle. The boy is girl’s

Q8. Pointing to a man in a photograph, a woman said, “His brother’s father is the only son of my grandfather.” How is the woman related to the man in the photograph?


Q11. The record for the biggest tiger hunt has not been met since 1911 when Lord Hardinge, then Viceroy of India, shot a tiger that measured eleven feet six and three-fourth inches.

bettered
improved
broken
No improvement
Solution:
The record is either made or broken. Here according to the sense of the sentence ‘met’ should be replaced with ‘broken’

Q12. It was so hot during the school parade that several of the weaker pupils passed by.

out
through
over
No improvement
Solution:
To give a sense of ‘qualify’ we use ‘pass out’. Therefore, ‘by’ should be replaced with ‘out’.

Q13. His powerful desire brought about his downfall.

Q14. He opened the letter without caring to read the address on the envelope.

Q15. Poor Tom laid in the shade of a tree before he could walk further.

lied
lain
lay
No improvement
Solution:
The given sentence wants to convey that Tom fell flat in the shade of a tree. For ‘fell flat’ it should be V2 of the verb ‘lie’. The V2 of ‘lie’ is ‘lay’. Therefore ‘laid’ should be replaced with ‘lay’. 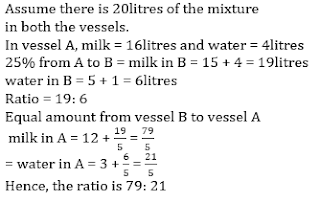 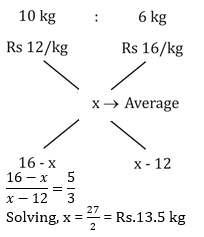 Q19. Two different qualities of sugar are mixed in some ratio. The price of one quality of sugar is Rs. 16/kg and that of another quality is Rs. 21/kg. In what ratio have the sugar of two qualities been mixed if the price of the mixture is Rs. 19/kg? 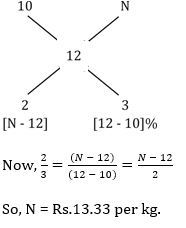 Q20. Two vessels A and B of equal capacities contain mixtures of milk and water in the ratio 4:1 and 3:1, respectively. 25% of the mixture from A is taken out and added to B. After mixing it thoroughly, an equal amount is taken out from B and added back to A. The ratio of milk to water in vessel A after the second operation is 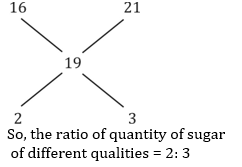