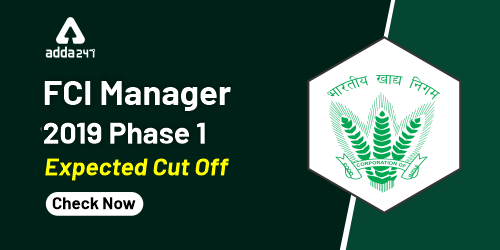 FCI Manager notification was released with 330 vacancies of Managers in various departments. Candidates will be appointed as Managers in various departments namely General, Depot, Technical, Movement, Accounts, Civil Engineering, Electrical, Mechanical Engineering, and Hindi. The FCI Manager Phase 1 exam common to all posts was conducted on 28th November where thousands of aspirants appeared with the aim to pass the initial stage and reach the next stage. Check out the expected FCI Manager Phase 1 Cut off.

The Phase 1 exam in which candidates appeared on 28th November consisted of 3 sections with 20 minutes allotted to each section. The FCI Manager cut off for Phase 1 will be based on the 3 sections combined and hence the overall cut off will only be provided for the selection of candidates in the Phase 2 exam. The overall good attempts as per the review of some students can be said to be between 67-76 for all the managerial posts. Click here to check FCI Manager Phase 1 Exam Analysis

The FCI Manager Cut off for Phase 1 exam will be updated according to 5 zones namely North Zone, South Zone, East Zone, West Zone & NE Zone and also for various posts of General, Depot, Technical, Movement, Accounts, Civil Engineering, Electrical, Mechanical Engineering, and Hindi. The Expected Cut off will range depending upon the zone and post one applied from. The FCI Manager Expected Cut off 2019 For phase 1 will range from 65 to 75 varying as per the zone and posts.

Factors on which FCI Manager cut off depends

The cut off will be based on various factors as the Phase 1 exam was conducted in 4 shifts. The level of exam in each shift was almost the same. Candidates must know about the factors on which the cut off depends as it will provide information regarding the expected cut off 2020. Take a look at the following factors: