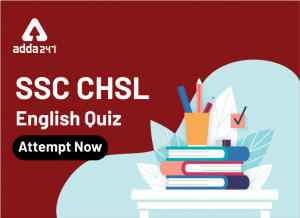 Q3. Improve the bracketed part of the sentence.
The more one gets, (more) one desires.
(a) the more
(b) a more
(c) as much
(d) No improvement

Q4. Select the word with the incorrect spelling.
(a) Lieutenant
(b) Inanimat
(c) Legging
(d) Lemma

Q6. In the following question, the sentence given with blank to be ﬁlled in with an appropriate word. Select the correct alternative out of the four and indicate it by selecting the appropriate option.

Q8. Rearrange the parts of the sentence in correct order.
P- Both for his heroic actions in restoring Ptolemy XII to power and coming.
Q- To visit Alexandria by November 41 BC. Antony was well-received by the populace of Alexandria,
R- Cleopatra invited Antony to come to Egypt before departing from Tarsos, which led Antony.
S- To Egypt without an occupation force like Caesar had done.

Q10. In the following question, out of the four alternatives, select the alternative which is the best substitute of the phrase.

S1. Ans. (a)
Sol. Indictment: a formal charge or accusation of a serious crime.
Arraignment: the action of arraigning someone in court.
Hence, option (a) is the correct synonym of the given word.
Meanings of other words are:
Entrapment: the state of being caught in or as in a trap.
Indoctrination: the process of teaching a person or group to accept a set of beliefs uncritically.
Inducement: a thing that persuades or leads someone to do something.

S3. Ans. (a)
Sol. “the more…. the more/less” is the correct phrase which is used for saying that when a particular activity, feeling etc. increases, it causes something else to change at the same time
e.g.:
The more, the merrier.
The bigger, the better

S4. Ans. (b)
Sol. Inanimate is the correct spelling which means showing no sign of life; lifeless.
Meanings of other words are:
Lemma: a word or phrase defined in a dictionary or entered in a word list.
Lieutenant: a deputy or substitute acting for a superior.

S6. Ans. (a)
Sol. First clause is in ‘present tense’ thus the next clause should be in present as well and since “so” is used thus, it emphasized that it is “very dirty” and there is no possibility to clean it. Hence, option (d) should not be used.
The only correct option is (a).

S7. Ans. (b)
Sol. Innocuous: not harmful or offensive.
Harmless: not able or likely to cause harm.
Abominable: causing moral revulsion.

S10. Ans. (c)
Sol. Obsolete: no longer produced or used; out of date.
Exotic: originating in or characteristic of a distant foreign country.
Archaic: very old or old-fashioned.
Ancient: belonging to the very distant past and no longer in existence.