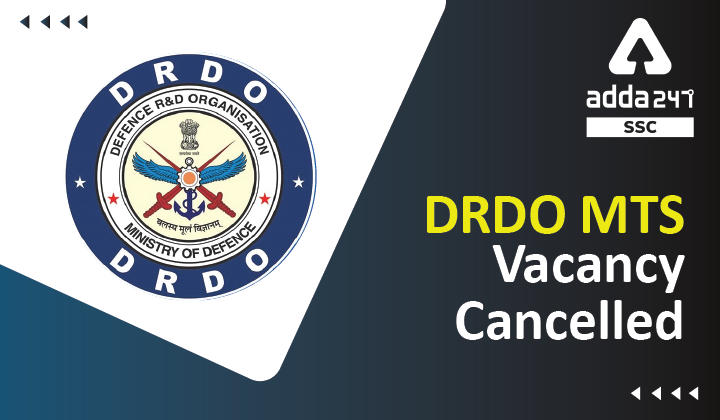 DRDO MTS 2019 Vacancy Cancelled: Defense Research and development organization (DRDO) has released a cancellation notice regarding the DRDO Entry Test: 2019-20/MTS advertisement which was published on the Employment News in December 2019. A total number of 1817 DRDO MTS vacancies has been cancelled. The candidates who have applied for the recruitment were eagerly waiting for updates regarding the DRDO Exam Dates.

Candidates are advised to stay tuned to this page for regular updates regarding DRDO MTS Vacancy 2019 being Cancelled. Till now h board has not disclosed any specific reason for the DRDO MTS Vacancy Cancellation. DRDO is working under the Ministry of Defence, Government of India and is responsible for the Research & Development of state-of-the-art battlefields systems required by the Nation’s forces viz. Army, Navy & Air Force.

The board has released a notice regarding DRDO MTS Vacancy 2019 Cancelled on the official website. According to notice 1817, DRDO MTS vacancies are cancelled till further notice.

DRDO has cancelled 1817 MTS vacancies. The official notice state- “It is hereby informed that the further processing of recruitment against the DRDO Entry Test: 2019-20/MTS advertisement published in the Employment News dated 21-27 December 2019 stands cancelled.” Candidates can check the screenshot of the official website of DRDO.

The total vacancies cancelled are 1817. The detailed vacancy distribution is as follows:

DRDO Full Form: What Stands For?

Q. How many vacancies of DRDO MTS 2019 are cancelled?

Ans: The total number of 1817 DRDO MTS vacancies are cancelled.

Q. What was the date of notification release on DRDO MTS 2019?

Ans: The notification was released on 23rd December 2019.