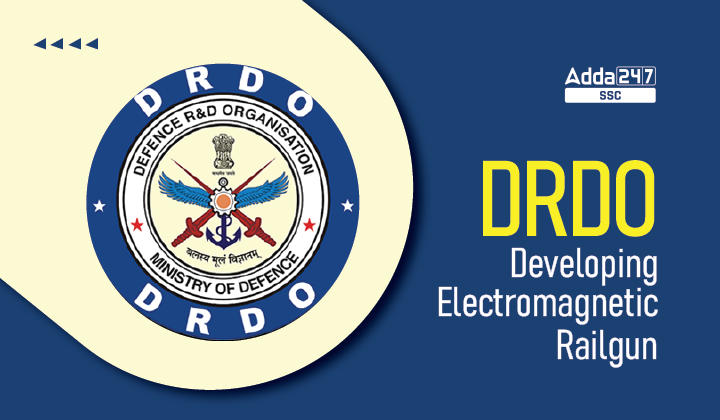 An electromagnetic railgun (EMRG) is a device that utilizes electromagnetic energy to launch high-velocity projectiles. This is a modern weapon system which is under development only in few countries like the USA, China etc. India’s DRDO has also joined the race to develop this advance device. Electromagnetic railgun works by the means of a sliding armature that is rapidly accelerated through a pair of conductive rails. It does not use conventional or incendiary explosives in the warhead, instead the projectile uses the enormous kinetic energy to hit and destroy the target precisely. It is based on the principles of homopolar motor. Contrary to normal explosive powered guns, electromagnetic railgun based projectiles can fly at speeds 6-7 times the speed of sound, measured in Mach numbers.

Better aerodynamically streamlined projectiles can provide longer effective ranges, while higher terminal velocity can enable the use of kinetic energy rounds with hit-to-kill guidance in place of explosive shells for target effects. It can strike the target precisely up to a distance of 200 KM.

The Armament Research and Development Establishment of India’s DRDO created a railgun in 1994 with a muzzle energy of 240 Kilojoules, a low inductance capacitor bank running at 5 Kilovolt power.

On November 6, 2017, DRDO took a big step in developing futuristic weapon platforms when it tested an electromagnetic railgun capable of firing a projectile at a speed of more than 6 kms per second.

The Electromagnetic Railgun could be a ‘game-changing’ weapon of the future from national security point of view considering the fact that India’s adversary China is in the advanced stage of developing this modern weapon. The gun can strengthen our naval strike capabilities by delivering hypervelocity projectiles to pinpoint accuracies and extended ranges. It eliminates the need for explosive safety standards for manufacturing, transportation, handling, and storage.

Q. What is unique about Electromagnetic Railgun?

Ans. It does not use conventional explosives.

Ans. The USA, China, India are few elite group of countries which are attempting to acquire this modern weapon.