DNA Full Form: DNA or Deoxyribonucleic Acid is a group of molecules that is responsible for carrying and transmitting the hereditary materials or the genetic instructions from parents to their offspring.  Nearly each and every cell in a multicellular organism possesses the full set of DNA required for that organism. It also serves as the primary unit of heredity in organisms of all types. Here in this article, we will be explaining in detail the discovery, structure, and function of DNA.

As explained earlier, DNA is a is a group of molecules that is responsible for transmitting the hereditary materials. In other words, DNA is a long molecule that contains a unique genetic code of a person. It holds the instructions for building the proteins that are required by our bodies to function. DNA instructions are passed to a child from parents, with roughly half of a child’s DNA originating from the father and half from the mother.

There are three different DNA types:

DNA was discovered by a Swiss biologist, Johannes Friedrich Miescher in the year 1869. The double helix structure of a DNA molecule was later discovered through the experimental data by James Watson and Francis Crick. Later, it was proved that DNA is responsible for storing the genetic information of a human being.

The information in DNA is stored as a code made up of four chemical bases: adenine, guanine, cytosine, and thymine. DNA of humans consists of about 3 billion bases, and more than 99 percent of those bases are the same in all people. Sequence or order, of these bases, is used to decides the information available for building and maintaining an organism, it is similar to the way when letters of the alphabet appear in a certain order to form words and sentences.

Among the three components of DNA structure, sugar is the one which forms the backbone of the DNA molecule. It is also called deoxyribose. The nitrogenous bases of the opposite strands form hydrogen bonds, forming a ladder-like structure. 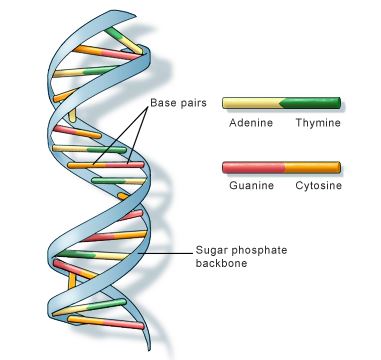 DNA is agenetic material that car­ries all the hereditary information which is coded in the arrangement of its nitrogen bases. Genes are small segments of DNA, consisting of 250 – 2 million base pairs, depending on the gene. A gene code for a polypeptide molecule, where three nitrogenous bases stand for one amino acid.

Sequence of genes is used to make a polypeptide, which then forms a protein. Since, every organism contains many genes in their DNA, different types of proteins can be formed. Proteins are the main functional and structural molecules in organisms. Apart from storing genetic information, DNA functions also include: