Here we are providing a Reasoning quiz accordance with the syllabus of SSC CGL Tier-I, This post comprises 15 Questions of Direction Test which really helps you getting more marks in final exam.

DE is in west direction with respect to A(starting point).

F is to the South-east of A. So, he is to the south-east from his starting point.

Q4. I am standing at the centre of a circular field. I go down south to the edge of the field and then turning left I walk along the boundary of the field equal to three-eighths of its length. Then I turn west and go right across to the opposite point on the boundary. In which direction am I from the starting point?
(a) North-east
(b) North
(c) South-west
(d) West
Ans.(c)
Sol. 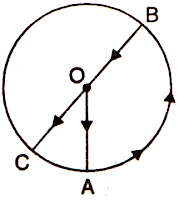 The movements are as indicated in figure. (O to A, A to B and B to C). Clearly, C lies to the South-west of O. 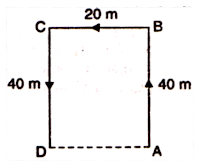 Akshat final position is S which is to the South-east of the starting point P. 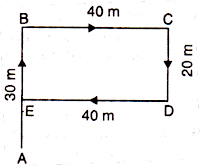 The movements of Niraj are as shown in figure (A to B, B to C, C to D, D to E).
E is in north direction with respect to A(starting point). 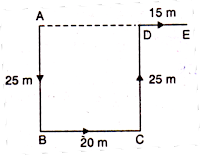 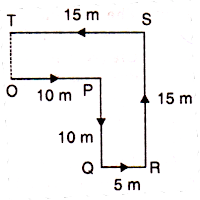 
Q13. The door of Priya’s house faces the East. From the back side of her house, she walks straight 50 metres, then turns to the right and walks 50 metres again. Finally, she turns towards left and stops after walking 25 metres. Now Priya is in which direction from the starting point?
(a) South-east
(b) North-west
(c) South-west
(d) North-east
Ans.(b)
Sol.

Clearly, Priya’s final position is D which is to the North-west of the starting point A.


Q15. Two ladies and two men are playing cards and are seated at North, East, South and West of a table. No lady is facing East. Persons sitting opposite to each other are not of the same sex. One man is facing South. Which directions are the ladies facing?
(a) East and West
(b) South and East
(c) North and East
(d) North and West
Ans.(d)
Sol.

No lady is facing east means a man faces east. Persons opposite are not of same sex. So, a woman will be facing west. Again, a man faces south. So, opposite to him will be a woman facing north.