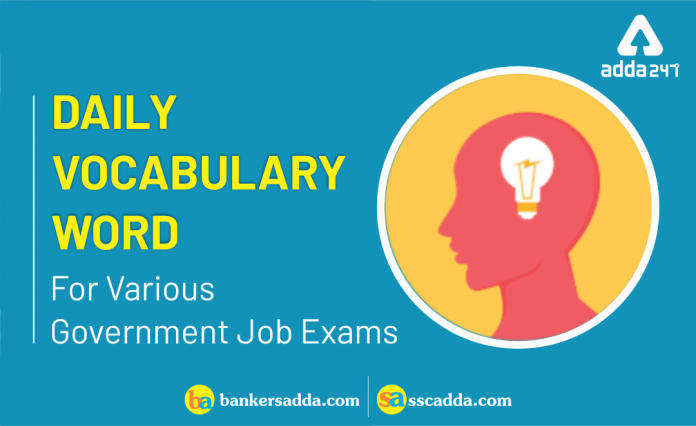 Vocabulary is an important part of English that helps you deal with all kinds of questions in objective as well as descriptive papers of various exams. Speaking of Govt Exams,  SSC GD Constable 2018  and SSC CPO Exams are the latest opportunities followed by SSC CGL 2018 and SSC CHSL 2018 Exams. You can learn new words daily from our Daily Word List. Learn the words and make your own sentences based on the given word list. Here are a few challenging words from an article published in a reputed newspaper. Follow SSCADDA to take over daily challenging words.

2. DOTARD (noun) बूढ़ा
Meaning: an old person, especially one who has become weak or senile.
Synonyms: oldster, graybeard, grandsire, elder.
Antonyms: juvenile, teen, minor, youth.
Usage: As the dotard slowly walked with a cane, he struggled with figuring out where the senior citizen center was located even though he had been there dozens of times.

3. HURL (verb) वेग से फेंकना
Meaning: throw or impel (someone or something) with great force.
Synonyms: fling, cast, project, propel.
Antonyms: dawdle, dally, amble, plod.
Usage: Pitchers will hurl the baseball at the catchers in a baseball game which will usually get clocked at a 100 miles per hour.

7. DETENTE (noun) नरमी
Meaning: the easing of hostility or strained relations, especially between countries.
Synonyms: agreement, peace, amity, concord.
Antonyms: disruptive, antagonism, antipathy, hostility.
Usage: The policy of detente was scrapped and the objective was increasingly to roll back the Soviet Union.

10. FURLOUGH (noun) लम्बी छुट्टी
Meaning: leave of absence, especially that granted to a member of the services or a missionary.
Synonyms: break, rest, recess, day off.
Antonyms: rehire, recall, travail, toil.
Usage: I have just learned that Cousin George has got his furlough extended thirty days.