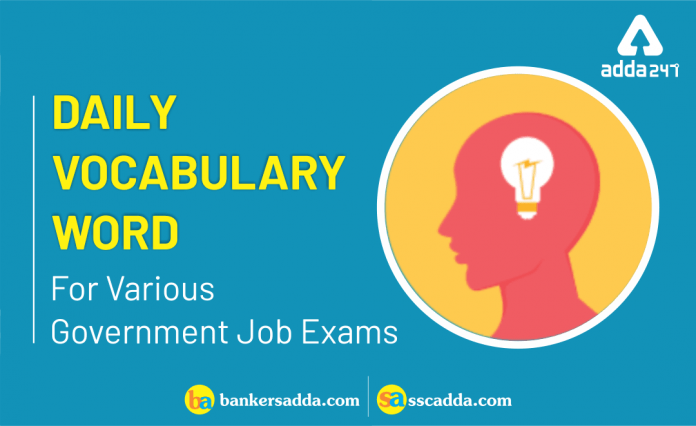 Vocabulary is an important part of English that helps you deal with all kinds of questions in objective as well as descriptive papers of various exams. Speaking of Govt Exams,  SSC  SSC CPO Exam is latest opportunities followed by SSC CGL 2018 and SSC CHSL 2018 Exams. You can learn new words daily from our Daily Word List. Learn the words and make your own sentences based on the given word list. Here are a few challenging words from an article published in a reputed newspaper. Follow SSCADDA to take over daily challenging words.

1. DISCERNIBLE (adjective) प्रत्यक्ष
Meaning: able to be perceived by a sense or by the mind.
Synonyms: detectable, distinguishable, palpable, perceptible.
Antonyms: impalpable, imperceptible, inappreciable, intangible.
Usage: Even though Jane used makeup to cover the bruises on her face, the marks were discernible to me.

2. CANON (noun) सिद्धांत
Meaning: a general law or criterion by which something is judged.
Synonyms: principle, rule, tenet, standard.
Usage: All they have is administrative fiat which fails any of the canons of the rule of law.

5. EERILY (adverb) भयपूर्वक
Meaning: in a strange and frightening manner.
Synonyms: hauntingly, creepily, scarily, spookily.
Antonyms: dulcetly, pleasingly, pleasantly, agreeably.
Usage: In front of him stood a masked man clutching a knife in one hand, grinning eerily at him.

6. STERN (adjective) कठोर
Meaning: (of a person or their manner) serious and unrelenting, especially in the assertion of authority and exercise of discipline.
Synonyms: grave, sober, austere, frowning.
Antonyms: benign, gentle, mild, tender.
Usage: All are stern judges and they expect others to be as serious about everything as they are.

8. NEXUS (noun) कड़ी
Meaning: a connection or series of connections linking two or more things.
Synonyms: junction, intersection, link, linkage.
Antonyms: detachment, division, partition, split.
Usage: Along with examining the major political issues of the day, his new column will focus on the increasingly controversial nexus between business and politics.