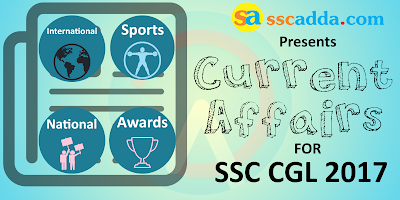 We’ve decided to provide “CURRENT AFFAIRS” of last ten months (From June onward). These notes will help you in GS/GK section a lot. We wish you all the very best for your upcoming exam.

i. The 9th World Environmental Education Congress (WEEC) will be held in Vancouver, Canada between September 9-15 2017.

ii. The theme will be ‘Weaving new connections’.
iii. The International Organizing Committee is the WEEC Permanent Secretariat, based in Italy. The congress is an international meeting point for everyone working with education for environment and sustainable future or who has an interest in the field.

ii. The new system of Central Board of Film Certification (CBFC) will make the entire process of certification transparent and efficient. The payments made during the process by the producers will go to Bharat Kosh portal.

i. General Bipin Rawat, Chief of the Army Staff (COAS) in New Delhi, released the book ‘Home of the Brave’ on the history of Indian Army’s Counter Insurgency Force, the Rashtriya Rifles (RR).

➺Prime Minister of Nepal is  Pushpa Kamal Dahal
➺India is supplying fuel to Nepal to meet the petroleum product requirements since 1974
➺The currency of Nepal is Nepalese Rupee and capital is Kathmandu.