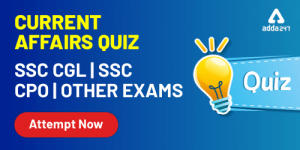 Q2.Jallikattu is referred to as bull taming event from which state?
(a) Kerala
(b) Tamil Nadu
(c) Telangana
(d) Karnataka

Q6.The Kalasa-Banduri Nala is a project undertaken by the Government of
(a) Uttarakhand
(b) Kerala
(c) Odisha
(d)Karnataka

Q8.Prime Minister Mahathir Mohammad resigned over political issues, he belong to which country ?
(a) Dominica
(b) Sweden
(c)Malaysian
(d) Mauritius

NIELIT Recruitment 2020: Today Is The Last Date To Apply Online...