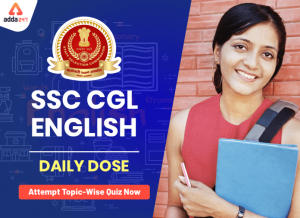 Direction (1-5): In the following passage, some of the words have been left out. First read the passage over and try to understand what it is about. Then fill in the blanks with the help of the alternatives given.

Directions (6-10): In the following passage, some of the words have been left out. First read the passage over and try to understand what it is about. Then fill in the blanks with the help of the alternatives given.

Unease and growing anxiety was ____________in Jammu and Kashmir on Sunday, a day ahead of the Supreme Court hearing on whether a Constitution Bench should go into the question of Article 35A, which ________ the State legislature to define “permanent residents” and provide special rights and privileges to them. A complete shutdown was observed in the Valley on the call of the separatist Joint Resistance Leadership. There ________ very thin traffic on the roads. Most people stayed indoors. However, there were no reports of any violence. The authorities suspended the Amarnath Yatra. All intra-State train services were _________. Extra deployments were made in all ________ areas.

S1. Ans.(a)
Sol. The subsequent part of the passage addresses the present tense and hence usage of option A is apt.

S2. Ans.(c)
Sol. ‘In’ is the correct preposition as it is used to show when doing one thing is the cause of another thing happening.

S3. Ans.(d)
Sol. Deficiency: the lack of something that is needed in order to meet a particular standard or level of quality, or the thing that is lacking.
Hence out of the four options, option D is apt.

S4. Ans.(b)
Sol. Track record is a noun referring to the past achievements or performance of a person, organization, or product.
Hence option B fits in the context.

S5. Ans.(c)
Sol. Lag: fail to keep up with another or others in movement or development.
Falter: to lose strength or purpose and stop.
Fail: be unsuccessful in achieving one’s goal.
‘Lag’ is appropriate usage as India’s progress is being compared with that of other countries. It hasn’t been stopped or completely failed in itself.

S7. Ans.(c)
Sol. Empower: give authority or power to do something.

S8. Ans.(b)
Sol. ‘Traffic’ is an uncountable noun which takes ‘singular verb’ with it. Hence ‘was’ is the appropriate choice.