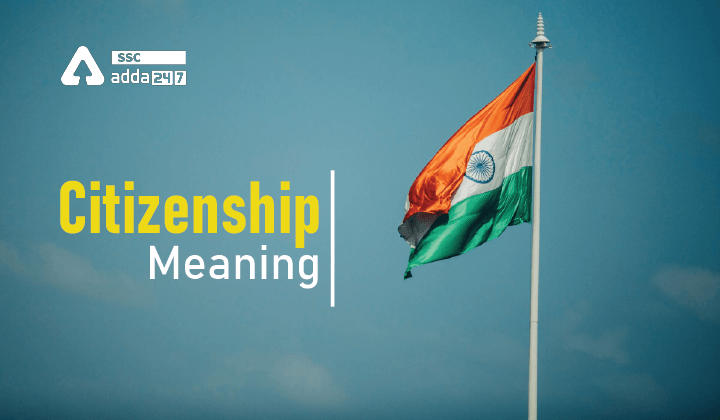 Citizenship is the stature of a person recognized under law as being a legal member of an independent state or belonging to a nation. In Indian Constitution, Articles 5 – 11 deal with the concept of citizenship. Citizenship is to become a lawful resident of the country. Citizenship of the country can be earned by meeting all the legal requirements of a national, state, or local government as per the rules. A nation grants certain rights and privileges and citizens are expected to follow their country’s laws and protect the nation against its enemies. Citizenship meaning is to get legal residence power if the country and protect the laws and orders of the particular country.

Article 5 : Citizenship at the commencement of the Constitution

As per this article, citizenship for people at the advent of the Constitution, i.e. 26th January 1950. Under this, citizenship is granted to those persons who have their domicile of Indian territory and –

Article 6 : Citizenship of Individuals who have migrated from Pakistan

(b) If a person has migrated after July 19th, 1948 and he has been got legal citizenship of India by Government. On that behalf by the government of the Dominion of India on a request made by him to such an officer before the commencement of the Constitution, provided that no person shall be so registered unless he has been resident in India for at least 6 months immediately foregoing the date of his application.

This article related to the rights of people who had migrated to Pakistan after March 1, 1947, but thereafter returned to India.

The article deals with the rights of people of Indian origin living outside India for intentions of employment, marriage, and education.

This article deals with the people voluntarily adopting citizenship in a foreign country who will not be citizens of India.

Any person who is assessed a citizen of India under any of the provisions of this Part shall continue to be a citizen and will also be subject to any constitution made by the Parliament.

Article 11 : Parliament to regulate the right of citizenship by law

The Parliament has the right to make any provision about the gain and termination of citizenship and any other issues relating to citizenship.

Citizenship of India can be obtained in the following ways:

Overseas Citizenship of India (OCI) is a form of permanent residency attainable to people of Indian origin and their husbands which allows them to live and work in India indefinitely. Despite its name, overseas citizenship of India status is not citizenship and does not grant the right to vote in Indian elections or hold civil office.

Overseas Citizenship of India is of immigration importance authorizing a foreign citizen of Indian origin to live and work in India for an uncertain period. The OCI card was launched by the Government of India to fulfill the demands of the Indians residing overseas who maintained dual citizenship.

The citizens must fulfill the requirements listed below to get Overseas Citizenship in India.

The termination of citizenship can be made in the following ways:

Global citizenship is the term for social, political, environmental, and economic actions of globally minded individuals and communities on a worldwide scale. You must follow the below-mentioned criteria to get citizenship for Indian Global citizenship.

There are many benefits of Citizenship for Indian Global Citizenship. The benefits are listed below.

Citizenship is the legal right to get permanent residence in the country. The citizenship meaning in Hindi is termed ‘Nagrikta’. Individuals need to fulfill all the requirements to gain citizenship in an individual country.

Ans – Overseas Citizenship of India is defined as a form of permanent residency available to people of Indian origin and their spouses which allows them to live and work in India indefinitely.

Que.2 Is citizenship can be terminated?

Ans – Yes, the citizenship of a country can be terminated if the citizen violates the laws and orders of the country and does not show respect for the country.

Ans - Overseas Citizenship of India is defined as a form of permanent residency available to people of Indian origin and their spouses which allows them to live and work in India indefinitely.

Que.2 Is citizenship can be terminated?

Ans - Yes, the citizenship of a country can be terminated if the citizen violates the laws and orders of the country and does not show respect for the country.