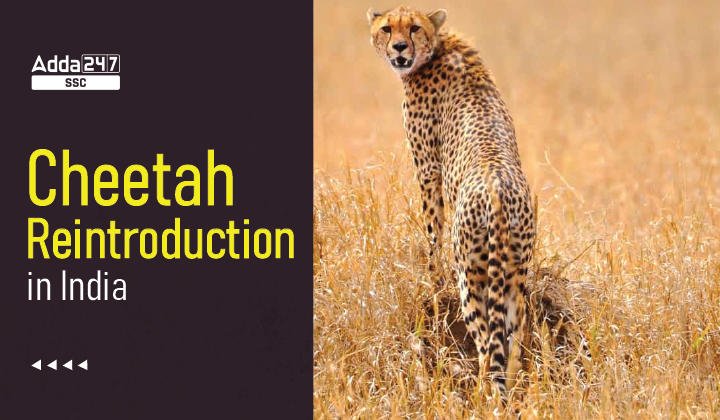 Finally, the time has come when Cheetah will roam India once again after it’s relocation to India from Namibia. Cheetah went extinct in the country since 1952. After 7 decades, the cheetah will return to the country on September 17. Eight African cheetahs from Namibia(five females and three males) will be flown to India. This is the first transcontinental relocation (Africa to Asia) of a large carnivore.

The agreement between India and Namibia will allow for the relocation of the first batch of cheetahs from southern Africa to Madhya Pradesh’s Kuno National Park.

While the current carrying capacity for the Kuno National Park is a maximum of 21 cheetahs, once restored the larger landscape can hold about 36 cheetahs. In 2021, the Supreme Court lifted its seven-year-long stay on a proposal to introduce African Cheetahs from Namibia into the Indian habitat.

Cheetah is one of the oldest of the big cat species, with ancestors that can be traced back more than five million years to the Miocene era. The cheetah is also the world’s fastest land mammal.

Why Asiatic Cheetah went Extinct in India?
Hunting, diminishing habitat and non-availability of enough prey like black buck, gazelle and hare were primarily responsible for the extinction of the Cheetah from India.
Events of climate change, it’s effects and growing human populations and interference aggravated these problems.

Cheetah lives in Africa(African) and Asia(Asian). Both these differs in appearance, strength and available numbers.

Difference Between Asiatic Cheetah and African Cheetah is shown below in the table:

Cheetah Reintroduction in India In Hindi

Kuno National Park is located in Madhya Pradesh. It is part of the Khathiar-Gir dry deciduous forests eco-region.
It was established in 1981 as a wildlife sanctuary.
The sanctuary was changed to Kuno National Park by the State government in 2018.
Why Kuno is preferred for Cheetah Translocation?

Indian Oil Corporation will provide ₹50 crore as a part of its corporate social responsibility (CSR) towards the Cheetah reintroduction Project. For this, Indian Oil had signed a Memorandum of Understanding (MoU) with National Tiger Conservation Authority (NTCA).
Under the project, a source population of 15-20 cheetahs will be flown in from Namibia and South Africa and will be introduced at the Kuno National Park in Madhya Pradesh.
Sept 17: Eight cheetahs will arrive in India by cargo plane in the capital of Rajasthan from Namibia and then they will be taken to reach Kuno-Palpur National Park in Bhopal.

Q. What is the IUCN status of Asiatic Cheetah?

Ans. The IUCN status of Asiatic Cheetah is Critically Endangered.

Q. From which country African Cheetah is being translocated to Kuno National Park?

Ans. African Cheetah is being translocated to Kuno National Park from Namibia.