Skip to content
Cell: Cell is called the fundamental unit of life. A cell is capable of independent existence and can carry out all the functions which are necessary for a living being. A cell carries out nutrition, respiration, excretion, transportation and reproduction; the way an individual organism does. Unicellular organisms are capable of independent existence which shows a cell’s capability to exist independently.
CELL THEORY (Schleiden, Schwann and Virchow):

Shape and Size of Cells: Cells come in all shapes and sizes. While most of the cells are spherical in shape, cells of various other shapes are also found. Most of the cells are microscopic in size, i.e. it is impossible to see them with naked eyes. Some cells are fairly large, e.g. a neuron in human body can be as long as 1 meter. The egg of an ostrich is the largest known cell of a living animal and an average egg is 15 cm long and 13 cm wide.

Cell wall: Cell wall is made of cellulose. It is somewhat hard but permeable to most of the substances. Cell wall is available in plant cells and in cells of bacteria and fungi.

Nucleus: Nucleus is covered by double membrane; called nuclear membrane. The fluid which is inside the nucleus is called nucleoplasm. Nucleus contains chromosomes which are important for the functioning of a cell. Chromosomes contain genes which are the carriers of genetic information. Nucleus plays an important role during cell division. Nucleus controls all the functions of the cell.

Prokaryotes and Eukaryotes: Based on the level of organization of nuclear material, a cell can be categorized as prokaryote or eukaryote. In some organisms, the true nucleus is absent. This means that the DNA and RNA are not bound by a membrane. Bacteria are examples of prokaryotes. When genetic materials are bound by a membrane, it is termed as true nucleus. In this case, the cell is called eukaryotic. Organisms other than bacteria are eukaryotes. Eukaryotes are considered as more advanced than prokaryotes. 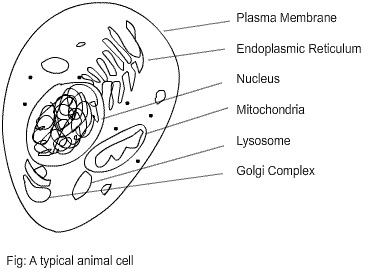 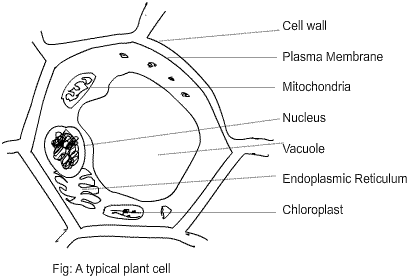 Endoplasmic Reticulum: Endoplasmic reticulum is a mesh-like structure which is composed of numerous tubes. It extends from the plasma membrane to the nuclear membrane. There are two kinds of endoplasmic reticulum, viz. smooth ER and rough ER. Rough ER has ribosomes on its surface which give it the rough appearance.
Function of ER: It serves as the transport channel in the cell. Substances are transported from cell membrane to cytoplasm and to nucleus and vice-versa. ER also serves the role of packaging many substances in the cell.

Lysosome: Lysosome are small sac-like structures and they are derived from Golgi complex. Lysosome contains digestive enzymes.
Functions of lysosome: The enzymes in the lysosome digest foreign particles and thus destroy them. Sometimes, the lysosome may burst open and its content ends up digesting the contents of the cell. The cell gets killed in the process. Due to this, lysosome is also called the ‘suicide bag of the cell’.
Ribosome: These are tiny dot like structures interspersed in the cytoplasm and also on the surface of Rough ER. Ribosome is responsible for protein synthesis.
Plastids: These are somewhat similar to mitochondria; in appearance. Plastids are found in plant cells. They are of two types, chromoplast and leucoplast. Colourful plastids are called chromomplast and colourless plastids are called leucoplast. Chloroplast is green in colour and is found in green parts of plants. Plastids too have their own DNA and ribosome.
Functions of Plastids: Leucoplasts are responsible for storing food; such as carbohydrates, protein and lipid. Chromoplasts impart various colours to the plant parts. A leaf of a plant is green in colour because of chloroplast. Chloroplast is the site of photosynthesis.

Vacuoles: These are fluid filled chambers and are often seen in many cells. Vacuoles are very large in plant cells. A plant cell usually has single but large vacuole. Such a vacuole fills almost the entire space inside the cell. Vacuoles are much smaller and very few in animal cells.