Here we are providing a Reasoning quiz accordance with the syllabus of SSC CGL Tier-I, This post comprises 15 Questions of Blood Relation which really helps you getting more marks in final exam.

Q1. Deepak is brother of Ravi. Reena is sister of Atul. Ravi is son of Reena. How is Deepak related to Reena?
(a) Son
(b) Brother
(c) Nephew
(d) Father
Ans.(a)
Sol.

Thus, Deepak is the son of Reena.

Thus, D is the brother-in-law of E.

So, F is the grandmother of D. 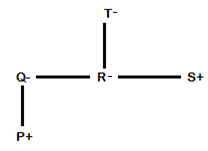 Thus, P is the son of Q means S is the maternal uncle of Q.

So, C may be the brother or sister of A.

Q11. If Meena says, “Anita’s father Raman is the only son of my father-in-law Mahipal”, then how is Bindu, who is the sister of Anita, related to Mahipal?
(a) Niece
(b) Daughter
(c) Wife
(d) None of these
Ans.(d)
Sol.

Thus, Bindu is the grand-daughter of Mahipal.

Directions (12-15): Read the information given below and answer the questions that follow:
(i) In a family of six persons A, B, C, D, E and F, there are two married couples
(ii) D is grandmother of A and mother of B.
(iii) C is wife of B and mother of F.
(iv) F is the grand-daughter of E.

Clearly, the gender of A not given so cannot be determined.

The gender of A is not known. So, neither (a) nor (b) is definitely true.
Clearly, D is the grandmother of A and F.