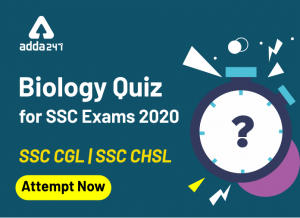 Q1. Which one of the following organs converts glycogen into glucose and purifies the blood?
(a) Liver
(b) Kidney
(c) Lungs
(d) Spleen

Q4. The branch of biology dealing with the study of cells is known as –
(a) Cytology
(b) Histology
(c) Psychology
(d) Physiology

Q5. Which is the anti-coagulant substance in blood?
(a) Fibrinogen
(b) Heparin
(c) Thrombin
(d) Globin

Q6. Which one of the following cells produce antibodies?
(a) Eosinophil
(b) Monocyte
(c) Basophil
(d) Lymphocytes

Q7.Arthritis is caused by the deposition of which “of the following” in the joints of the body?
(a) Urea
(b) Uric acid
(c) Albumin
(d) Cholesterol

Q8.Which of the following parasites is responsible for 65% of the cases of malaria in India?
(a) P. malariae
(b) P. vivax
(c) P. falciparum
(d) P. Ovale

Q9.Hydrophobia is caused by –
(a) Bacteria
(b) Fungus
(c) Virus
(d) Protozoan

S2.Ans.(b)
Sol. Saliva contains the enzyme amylase, also called ptyalin, which is capable of breaking down starch into simpler sugars such as maltose and dextrin that can be further broken down in the small intestine.

S4. Ans.(a)
Sol. Cytology is a branch deals with study of cells.

S5. Ans.(b)
Sol. Heparin is also known as unfractionated heparin, is medication which is used as an anticoagulant.

S7. Ans.(b)
Sol. Arthritis is caused by deposition of uric acid crystals (mono-sodium urate) in joints and fluids within the body gout, is a painful form of arthritis.

S8. Ans.(b)
Sol. Plasmodium vivax is a protozoan parasite and a human pathogen, the most frequent and widely distributed cause of recurring malaria. P. vivax is one of the five species of malaria parasites that is responsible for 65% cases of malaria in India.

S9. Ans.(c)
Sol. Fear of water is known as hydrophobia. Such type of patients gets afraid from river, lake sea etc. Hydrophobia is the old name of Rabies which is a viral disease. Its virus affects the nervous system.

S10 Ans.(c)
Sol. Anthophobia is an abnormal and persistent fear of flowers. The term comes from the Greek roots Anthos means flower and Phobos means fear.