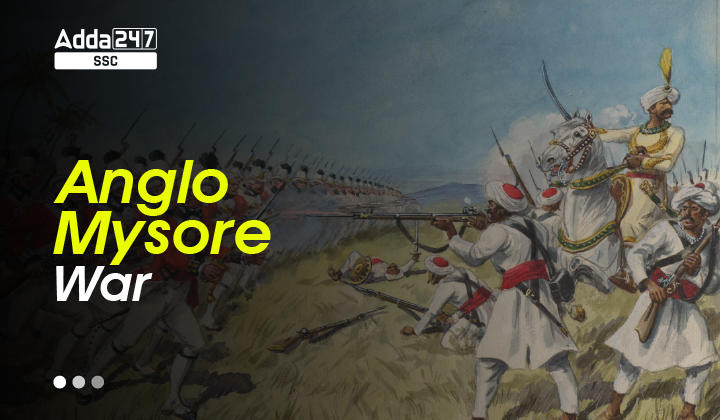 The list of Anglo Mysore Wars is given below:

The First Anglo-Mysore War (1766–1769) was fought between the Sultanate of Mysore and the East India Company. The war was initiated in part by the strategies of Asaf Jah II, the Nizam of Hyderabad, who sought to divert the company’s resources from attempts to gain control over the Northern Circars. Hyder Ali was made the Dalavayi (commander-in-chief), and later the Chief Minister of the Mysore state under Krishnaraja Wodeyar II, ruler of Mysore.

Later he became the de-facto ruler of Mysore and trained his modern army along European lines. He built a strong army and conquered many regions in the South including Bidnur, Canara, Sera, Malabar and Sunda. These achievements of his alarmed the British. As a result, the British, along with the Marathas and the Nizam of Hyderabad declared war on Mysore. Hyder Ali brought the Marathas and the Nizam to his side with skilful diplomacy and paid the Marathas to turn them neutral.

The first war continued for a year-and-a-half without any conclusion. Later  Haidar changed his strategy and suddenly appeared before the gates of Madras. The panic  and chaos and at Madras forced English to conclude a very humiliating treaty with Haidar on April 4, 1769—Treaty of Madras which brought an end to the war. The conquered territories were restored and they agreed on helping each other in case of a foreign attack.

The first Anglo-Mysore War was ended But there was no peace between the English and Haider Ali  for maintaining friendly relations with each other. It was only a temporary treaty between two enemies. Therefore, the first Anglo-Mysore War was not a decisive war. British and Hyder Ali both wanted to expand their territories at the cost of anything which became the major cause of the war.

Marathas attacked Mysore in 1771 but British refused to honour the Treaty of Madras and did not support Hyder Ali. Due to this, Hyder Ali’s territories were taken by the Marathas. He had no option left but to buy peace with the Marathas for a sum of Rs.36 lakh and another annual tribute. The angered Hyder Ali attacked Mahe, a French possession under Hyder Ali’s dominion, he declared war on the English in 1780. Hyder Ali died in 1782 but the war was continued by his son Tipu Sultan.

Sir Eyre Coote, who earlier defeated Hyder Ali several times, ended the war with the Treaty of Mangalore. As per the Treaty, both parties agreed to return the captured territories and prisoners to each other.

British improved their relationship with the Nizam of Hyderabad and the Marathas. Tipu Sultan who gained control over Mysore after Hyder Ali’s death, had French help in training his military resources. He also refused to release the English prisoners captured during the second Anglo-Mysore war as per the Treaty of Mangalore. Tipu announced war on Travancore in 1789 which was a friendly state of the British.

The Governor-General of Bengal, Lord Cornwallis declared war on Tipu in 1790. The English advanced towards Tipu’s capital of Seringapatam and Tipu bargained for peace. The war was ended with the Treaty of Seringapatam in 1792. As per the treaty, Tipu had to surrender half of his kingdom to the English including the areas of Malabar, Dindigul, Coorg and Baramahal. He also surrendered two of his sons as surety to the British till he paid his due.

The Treaty of Seringapatam was fruitless to bring peace between Tipu and the English. Tipu also refused to accept the Subsidiary Alliance of Lord Wellesley and joined hands with the French which the British saw as a threat. Mysore was attacked from all four sides. The British secured victory at the Battle of Seringapatam in 1799. Tipu died while guarding the city. After Tipu’s death, Tipu’s territories were divided between the British and the Nizam of Hyderabad.

Ans. The third Anglo Mysore War was won by British 1799 by defeating Tipu.

Ans. The British secured victory at the Battle of Seringapatam in 1799.

Ans. The third Anglo Mysore War was won by British 1799 by defeating Tipu.

Ans. The British secured victory at the Battle of Seringapatam in 1799.