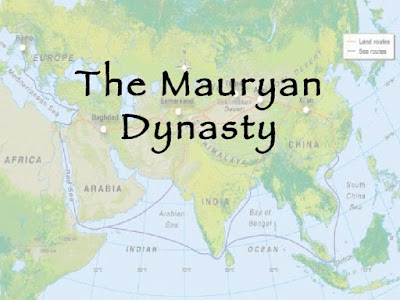 Some of the rulers of Mauryan Dynasty

Chandragupta Maurya
a) He was the founder of the Mauryan Empire.
b) He was known in Greek and Latin accounts as Sandrokyptos, Sandrokottos or Androcottus.
c) He established the empire by overthrowing the Nanda dynasty of Magadha under Dhana Nanda.
d) Chanakya was the Prime Minister of Chandragupta while Rakhshasa was his chief advisor.
e) After his conquests, the Empire stretched from Assam to Afghanistan, from Kashmir to the Deccan
f) Chandragupta defeated the Seleucus I Nicator, the successor of Alexander in Macedonia. As part of the agreement reached later, Chandragupta married a daughter of Seleucus and in return gifted 500 war elephants.
g) Seleucus sent an ambassador to Chandragupta’s court called Megasthenes.
h) Towards the end of his life, Chandragupta embraced Jainism and migrated south with Acharya Bhadrabahu to Shravanabelgola in Karnataka.

Bindusara
a) He was the successor to Chandragupta.
b) He was the son of Chandragupta and the father of Asoka.
c) He was also known as Amitraghata or Ajathasetru
d) He expanded the Mauryan Empire south beyond the Deccan, as far south as Mysore
e) During his reign, the Empire included all of India except Kalinga and the southern kingdoms of Cheras, Cholas and Pandyas.
f) The Seleucid ambassador to Bindusara’s court was Deimakos

Asoka the Great
a) Successor to Bindusara
b) Also known as Devanampriya and Priyadarshin
c) Conquered Kalinga and added it to the Mauryan Empire.
d) Was initially an Ajivaka but later embraced Buddhism after the conquest of Kalinga.
e) Asoka organized the Third Buddhist Council at Pataliputra in 250 BCE. It was conducted by the monk Mogaliputta-Tissa, who was also the spiritual teacher of Asoka.
f) He is known for the Asoka Chakra, the Asoka Pillars and the Lion Capital at Sarnath
g) The Ptolemaic dynasty of Egypt under king Philadelphus sent the ambassador Dionysius to the court of Asoka

Chanakya
a) Also known as Kautilya, Vishnugupta.
b) He was the advisor and trainer of Chandragupta.
c) He later served as the Prime Minister of the Mauryan Empire under Chandragupta and his son Bindusara.
d) Author of the Arthasastra and the Nitishastra. The Arthashastra discusses monetary policies, warfare and international relations while the Nitishastra is a treatise on the ideal way of life and philosophy.

Ending of the Dynasty
The Mauryan Empire was dissolved in c. 185 BC with the assassination of the last ruler Brihadrata by his commander-in-chief Pushyamitra Sunga.