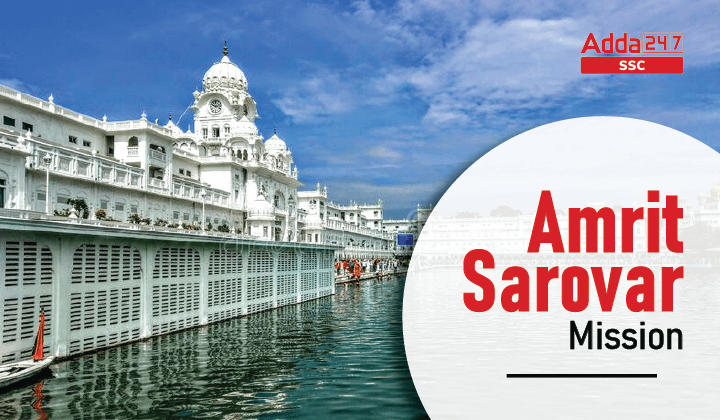 Amrit Sarovar Mission- Why in news?

UT Administrator Banwarilal Purohit inaugurated Chandigarh’s first Amrit Sarovar at Kaimbwala village as part of the ‘Amrit Sarovar Mission’. It is also important to note that Uttar Pradesh has become home to the country’s first-ever ‘Amrit Sarovar’ which was inaugurated in Rampur district. The inauguration was done by the union minister Mukhtar Abbas Naqvi and state’s Jal Shakti Minister Swatantra Dev Singh.

Prime Minister has launched a new initiative named Mission Amrit Sarovar on 24th April 2022 to conserve water for the future. The Mission is aimed at developing and rejuvenating 75 water bodies in each district of the country as a part of celebration of Azadi ka Amrit Mahotsav.
It would lead to creation of 50,000 water bodies of a size of about an Acre or more. Each of these Amrit Sarovar will have approx. area of 1 acre with a water holding capacity of 10,000 cubic meters.

The Mission encourages mobilization of citizen and non-govt resources for supplementing these efforts. It has been launched with a whole Government Approach with 6 Ministries/Department. They include:

Bhaskaracharya National Institute for Space Application and Geo-informatics (BISAG-N) is the technical partner for the Mission.

The Mission works through the States and Districts, through refocusing of various schemes such as MGNREGA, 15th Finance Commission Grants, PMKSY sub schemes such as Watershed Development Component, Har Khet Ko Pani besides States’ own schemes.

The mission will engage Local freedom fighter, their family members, Martyr’s family members, Padma Awardee and citizens of the local area wherein an Amrit Sarovar is to be constructed, at all stages. Thus, people’s participation in the Mission is the focal point.

Likely Benefits of the mission