Practice is the only key to polish one’s preparation and to avoid repeating the mistakes. Either you are preparing for SSC CGL, CHSL, JE or any exam conducted by SSC, English is a very important section. Solving quizzes on daily basis can improve your fluency of understanding this section to the utmost. SSC CGL Tier 2 is is to be held from 17 Feb to 22 Feb 2018. English holding 200 questions in CGL Tier 2 can either make or break your chances of getting your dream job. Today, in this English quiz we are providing Active Passive quiz holding captivating weightage in CGL Tier 2 Exam. Attempt this quiz and learn effectively  We wish you good luck for the upcoming Exams.


Direction (1-15): In these questions a sentence has been given in Active/Passive Voice. Out of the four alternative suggested below, select the one which best expresses the same sentence in Passive/Active Voice. 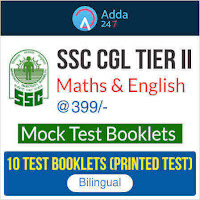