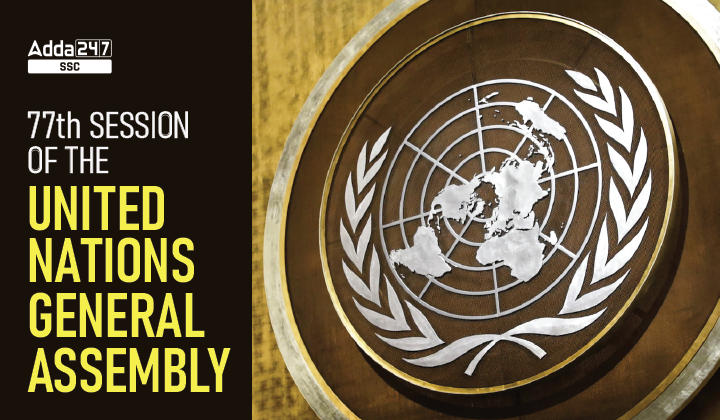 77th Session of the United Nations General Assembly is going to take place in New York City, USA. The theme of the 77th UNGA is ‘A Watershed Moment: Transformative Solutions to Interlocking Challenges’.

External Affairs Minister S Jaishankar is going to participate in the 77th Session of the United Nations General Assembly. He will also host a Ministerial meeting of the G4 – India, Brazil, Japan, and Germany – as well as participate at the High Level Meeting of the L-69 Group on ‘Reinvigorating Multilateralism and Achieving Comprehensive Reform of the UN Security Council’.
The L-69 Group consists of developing countries from Asia, Africa, Latin America, Caribbean and Small Island Developing States, focused on reforms of the UN Security Council.

Quad (India, the U.S., Australia, and Japan) Foreign Ministers met on the sideline of the United Nations General Assembly (UNGA) to sign a Humanitarian Assistance and Disaster Relief (HADR) partnership into effect. Under the HADR partnership, the member countries will coordinate their disaster response operations in the Indo-Pacific region.

Quad is a grouping of four democracies –the US, India, Australia and Japan. Being democratic nations and sharing common interest of free maritime trade and security, they find it suitable to join a common platform. Quad aims to ensure and support a “free, open and prosperous” Indo-Pacific region.

The idea of Quad was first mooted by Japanese Prime Minister Shinzo Abe in 2007.

The G4 nations traditionally meet on the sidelines of the annual high-level UNGA session. They reiterated their joint commitment to work toward text-based negotiations that lead to Reformed Multilateralism. They highlight the emerging complex global challenges which necessitates reform in UNSC to make it more inclusive and democratic.

Keep visiting our site to get the latest updates on outcomes of 77th Session of the United Nations General Assembly.

The UNGA performs various functions. It is responsible for the approval of the UN budget, appointing the non-permanent members to the Security Council, appointing the UN secretary-general, receiving reports from other parts of the UN system, and making recommendations through resolutions. The UNGA is the only UN organ wherein all member states have equal representation.

Q. Which summit of the UN General Assembly is going to take place?

Q. How many members are there in the UN General Assembly?

Ans. There are 193 members in the UN General Assembly.

Q. Where did the first summit of UN General Assembly took place?

Which summit of the UN General Assembly is going to take place?

How many members are there in the UN General Assembly?

There are 193 members in the UN General Assembly.

Where did the first summit of UN General Assembly took place?