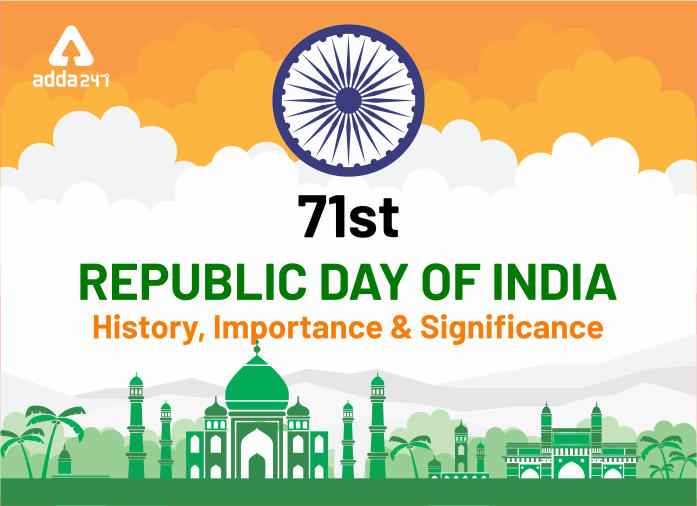 26th January is celebrated as the Republic Day of India and this year we are celebrating the 71st Republic Day. On this day, the longest written constitution of the world of the largest democracy came into effect and we became a sovereign republic. This day is celebrated by all Indians and 26th of January has been declared as a national holiday by the government of India. The chief guest for this year’s republic day parade to be held at India Gate, New Delhi is Brazilian president, Jair Messias Bolsonaro.

Republic Day is celebrated because the constitution of India was enacted on this day in 1950 and subsequently Government of India Act 1935 was replaced. Although the constitution of India was drafted on November 26, 1947, it came into effect on 26th January 1950 with the formation of a democratic system. The history of this day traces back to 1929 during the Lahore session in December when Pt. Jawaharlal Nehru was elected as the president and congress finally voted for Purna Swaraj (complete independence). It was proposed that the last Sunday of January 1930 would be celebrated as Independence day which fell on 26th. On that day, Pt. Nehru hoisted the Tricolour at the bank of Ravi river at Lahore but it wasn’t the complete independence. Finally, we got our independence on 15th August 1947 and 26th January was chosen to be the Republic Day Of India.

On Republic Day, flag hoisting ceremonies, parades by armed forces and school children are held across the country. The most important of these parades is held at Rajpath in New Delhi, which showcases the rich cultural heritage and military prowess of the country.  The chief Republic Day ceremony is carried out in the National Capital Delhi with the President giving his speech, followed by the Republic day parade showcasing our power, cultural heritage with Tableaus of different states and children dancing to celebrate independent India. Various awards and medals are given to the people from armed forces as well as to civilians. Helicopters from the armed forces fly past the parade area that shower rose petals over there. The parade comes to a closure with a “fly past” by the Indian Air Force, that involves fighter planes of flying past the dais, symbolically saluting the president.

India became independent on 15th of august, 1947. Even after independence, the country did not have a sound constitution. The laws, before the enactment of the constitution, were running on the basis of Government of India Act 1935. Having realized the need for a permanent constitution and its own governing body, the government of India appointed a Drafting Committee on 28th of August 1947 to draft it and Dr, B. R. Ambedkar as the Chairman of the Drafting Committee. After almost 3 years, the 308 members of the Assembly, after many consultations and a few modifications finally signed a constitution on 24th of January 1950, which came into effect on 26th of January 1950. And, that day, is being celebrated as Republic Day in India ever since then. This day defines the importance of having a proper constitution that all the citizens must abide by. As written in the preamble;

“WE, THE PEOPLE OF INDIA, having solemnly resolved to constitute India into a SOVEREIGN SOCIALIST SECULAR DEMOCRATIC REPUBLIC and to secure to all its citizens:
JUSTICE, social, economic and political;
LIBERTY of thought, expression, belief, faith and worship;
EQUALITY of status and of opportunity;
and to promote among them all
FRATERNITY assuring the dignity of the individual and the unity and integrity of the Nation;
IN OUR CONSTITUENT ASSEMBLY this twenty-sixth day of November 1949, do HEREBY ADOPT, ENACT AND GIVE TO OURSELVES THIS CONSTITUTION.”