Prime Minister Narendra Modi has instructed the various government departments and ministries to recruit 10 lakh candidates on a “mission mode” in the next 18 months after the allegations of opposition parties regarding the issue of unemployment across the country. PM Modi has issued this announcement to solve the major problem of unemployment in India. This news comes up as a piece of very good news for all the aspirants who were waiting for the government job opportunities to secure their future and who are facing the problem of unemployment even after having a graduate degree.

PM Modi has recently reviewed the Human Resources status in all the government departments and ministries and announced 10 lakh vacancies through the official Twitter handle with a statement – ” PM Modi reviewed the status of Human Resources in all departments and ministries and instructed that recruitment of 10 lakh people be done by the government in a mission mode in next 1.5 years”.

Railway will Help to achieve this target

After the tweet of PMO, Railway Ministry retweeted stating that the railway will help this vision of Prime Minister Narendra Modi by filling up the maximum number of vacant posts through the various recruitment of Railways.

Ministry of Railways tweeted – “Railways ongoing recruitment processes will be accelerated to help achieve this objective” As the RRB NTPC exams are ongoing on across the country. 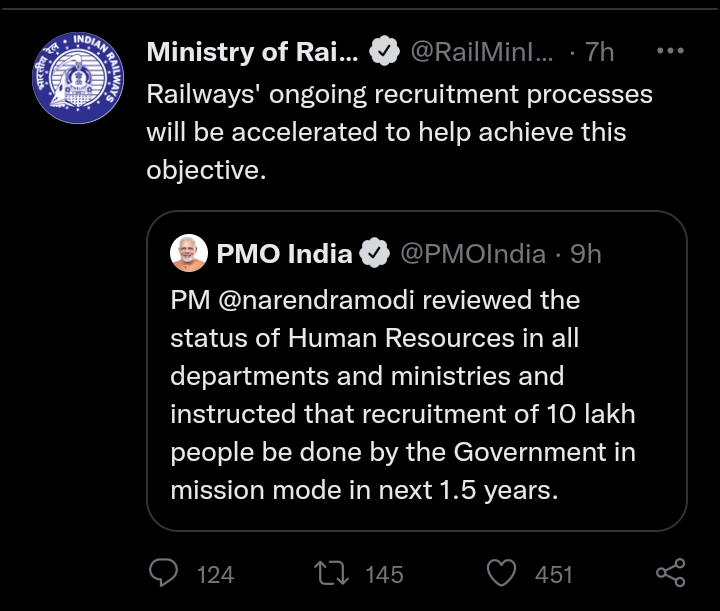 This will be a great opportunity for the candidates who are looking forward to grabbing their seats in various government organizations. This vision of PM Modi of providing employment to 10 lakh candidates will surely solve the issue of unemployment which is rising on daily basis in our country. This is the perfect time for the youth of India instead of complaining about fewer opportunities now focus on the preparation to reserve your seat in a government organization with a secured job. The maximum number of vacancies are in ministries as well as in various departments of the government of India like revenue, Defence, Post, and Indian railways. As of March 1, 2020, the government told the parliament that around 8.72 lakhs posts have been lying vacant. The government will be filling these vacant positions soon.

Rajya Sabha has released the notice showing the distribution of 10 lakh vacancies as per the department. After the announcement by PM for recruiting 10 lakh vacancies candidates must be looking for the number of vacancies in various departments. The notice states that 10th Lakh recruitments will be generated and filled up in the next 1.5 years all over the country in different ministries and departments. 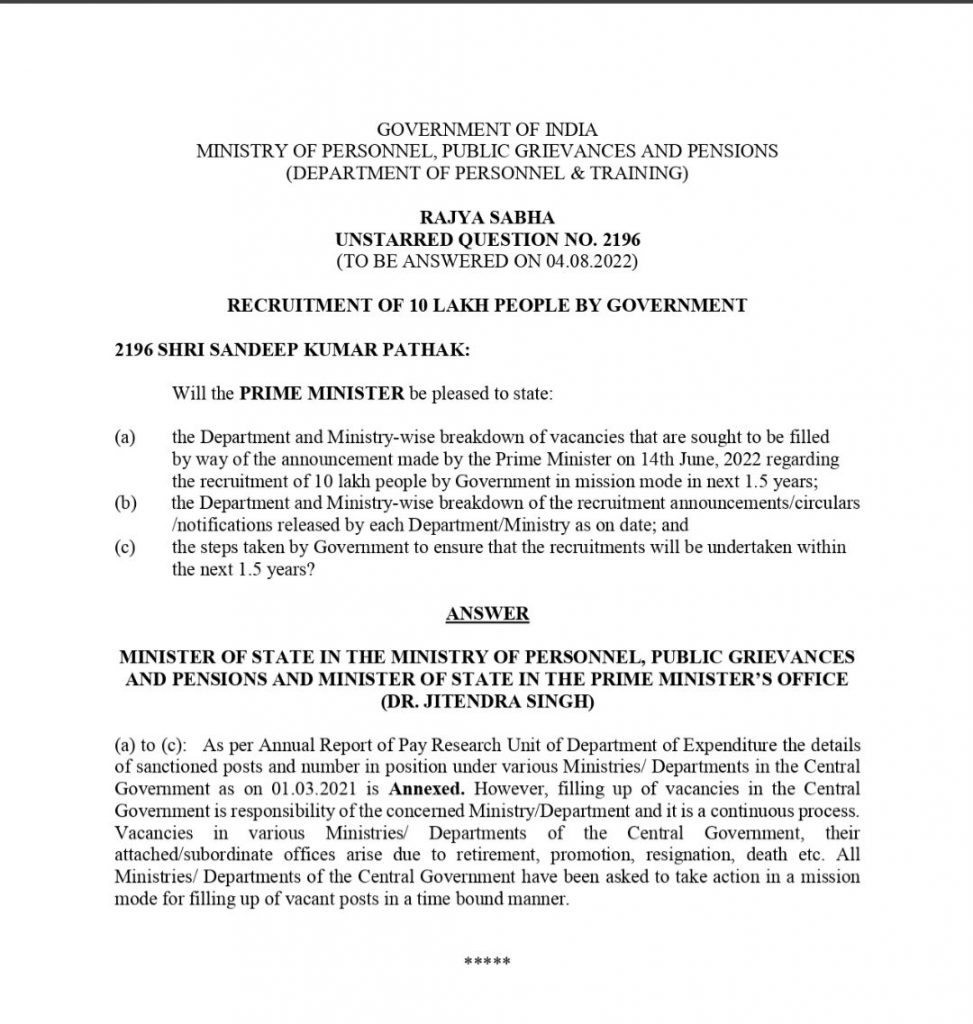 DR. Jitendra Singh (Minister of State in PMO) states that the posts in the government departmental vacancies are vacant due to the retirement, promotion, resignation, and death of persons, and the responsibility to fill these posts is of the department in which this space is created. In the following table, we have given the number of vacant positions in the various departments and ministries for Grade A, B & C. Here G denotes Gazetted and NG denotes Non-Gazetted.