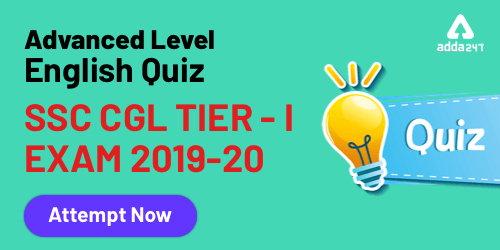 Direction (1-10): In the following questions, out of the four alternatives, choose the one which can be substituted for the given words/sentence.

Q1. Confinement to one place to avoid spread of infection
(a) Isolation
(b) Quarantine
(c) Seclusion
(d) Reclamation

Q4. The state of being poor
(a) Poorness
(b) Penniless
(c) Penury
(d) Pentecost

Q6. A very delicate flaw or mistake which is not expected from the person making it
(a) Sanguine
(b) Sacrament
(c) Solecism
(d) Sententious

Q7. A court or open space usually rectangular and enclosed by a building
(a) Quadragenarian
(b) Quadrilateral
(c) Quadrangle
(d) Quadruped

Q8. To divide by cutting or slicing, especially suddenly and forcibly
(a) Detach
(b) Bisect
(c) Sever
(d) Dissect

Q9. Causing a burning sensation like that of hot liquid on the skin
(a) Piping
(b) Igneous
(c) Sizzling
(d) Scalding

S1. Ans.(b)
Sol. Quarantine: a state, period, or place of isolation in which people or animals that have arrived from elsewhere or been exposed to infectious or contagious disease are placed.

S2. Ans.(a)
Sol. Insurgent: a person fighting against a government or invading force; a rebel or revolutionary.

S3. Ans. (a)
Sol. Lapidist: a treatise on precious stones.

S5. Ans.(a)
Sol. Peroration: the concluding part of a speech, typically intended to inspire enthusiasm in the audience.
Sophist: a paid teacher of philosophy and rhetoric in Greece in the Classical and Hellenistic periods, associated in popular thought with moral scepticism and specious reasoning.
Ineffable: too great or extreme to be expressed or described in words.

S6. Ans.(c)
Sol. Sanguine: optimistic or positive, especially in an apparently bad or difficult situation.
Sacrament: a ceremony regarded as imparting spiritual grace, in particular:
Sententious: given to moralize in a pompous or affected manner.

S7. Ans.(c)
Sol. Quadragenarian: a person who is between 40 and 49 years old.
Quadrilateral: a four-sided figure.
Quadruped: an animal which has four feet, especially an ungulate mammal.

S8. Ans(c);
Sol. Sever: divide by cutting or slicing, especially suddenly and forcibly.
Detach: disengage (something or part of something) and remove it.
Bisect: to divide into two parts.
Dissect: methodically cut up (a body or plant) in order to study its internal parts.

S9. Ans(d);
Sol. Scalding: to burn or affect painfully with or as if with hot liquid or steam.
Piping: (high-pitched tone.
Igneous: (of rocks) formed from magma (very hot liquid rock that has cooled).
Sizzling: very hot.

S10. Ans(a)
Sol. Adipose: (especially of body tissue) used for the storage of fat.
Porcine: of, affecting, or resembling a pig or pigs .
Corpulent is (of a person) fat.